Another food facility goes up in flames, tens of thousands of chickens killed

A May 28 fire at a Minnesota egg producing farm, which killed as many as 200,000 chickens, is the latest in an odd series of disasters that have hit food processing plants throughout the United States. 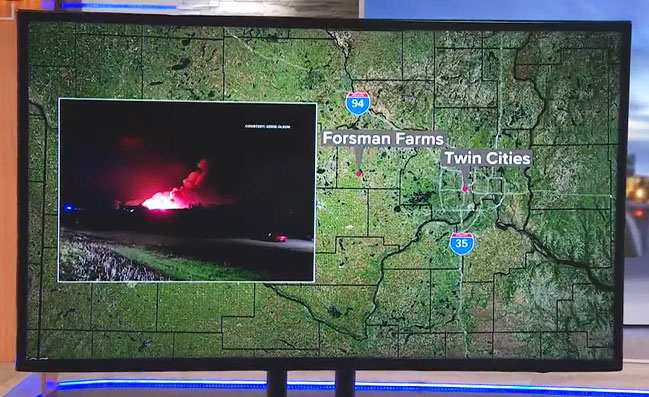 The fire at Forsman Farms in Howard Lake, Minnesota destroyed a poultry building and killed at least tens of thousands of chickens, up to as many as 200,000, farm spokesperson Jon Austin said in a statement. Some chickens in adjacent buildings were also affected, mostly from smoke inhalation.

Wright County Sheriff’s Office Sgt. Troy Wachter told KARE 11 News the fire is believed to have been accidental but the state fire marshal is investigating the cause.

In a statement, Austin said, “Overnight, a fire destroyed one of our barns at our Howard Lake farm. No one was injured and we are grateful that first responders were quickly on scene to put out the fire. Unfortunately, chickens were lost because of the fire. We are evaluating the extent of the damage – which appears to be confined to a single structure – as well as investigating the cause of the fire.”

Over the weekend of April 30, food processing plants in Chesapeake, Virginia and Fresno, California were damaged in fires. In recent months, over a dozen such plants in the U.S. have been devastated by some kind of disaster.

On April 30, a Perdue Farms plant in Chesapeake, Virginia caught fire. A large soybean processing tank caught fire and it took firefighters about an hour to get it under control, local reports said. No one was injured and the cause had not yet been determined. The tank was cleared of all soybeans.

Related: ‘Story gets weirder’: What is it with food plants going up in flames nationwide? May 5, 2022

On May 1, fire broke out at a Saladino’s food processing plant in Fresno, California, according to KFSN-TV. Several employees were evacuated from the building while firefighters put out the flames. Hours later, firefighters responded to an ammonia leak at the same building. The report said it is unclear whether the leak was related to the fire. No one was hurt.

While there are no obvious links to any of the food processing plant disasters, Fox News host Tucker Carlson noted In April that “the story gets weirder.”

During his April 22 broadcast, Carlson noted that two of the plants that were recently damaged were hit by falling airplanes in the same week.

“A plane apparently crashed at a General Mills plant … in Covington, Georgia. Six tractor-trailers were reportedly on fire … This is the second time in a week that something like this has happened,” Carlson said. “On April 14, a plane crashed into the Gem State processing plant in east Idaho. What’s going on here? Food processing plants all over the country seem to be catching fire.”

Seattle radio host Jason Rantz joined Carlson to give his perspective on the incidents.

“When you’ve got well over a dozen food processing plants and warehouses getting destroyed or seriously damaged over just the last few weeks, at a time when the food supply is already vulnerable, it’s obviously suspicious, and it could lead to serious food shortages,” he said.

Rantz also said the worry exists that these incidents are “an intentional way to disrupt the food supply.”

There are no reports of fires destroying farmland of the top owner of such land in the United States. That would be Bill Gates.

Another food facility goes up in flames, tens of thousands of chickens killed added by Editor Two on June 9, 2022
View all posts by Editor Two →