Was Walter Cronkite this effective?

Despite being banned from Twitter and other platforms, former President Donald Trump continues to humiliate and infuriate the Left and its Big Media propagandists.

After challenging all comers to debate him in public about the facts of the 2020 election, Trump noted that there were “no takers.”

“It’s really interesting, everybody wants me on television, I get the highest ratings by far, they need ratings to survive, and yet I put out a challenge to debate me about the massive election fraud, which took place in the 2020 Presidential Election, and there are no takers — think of it, zero takers for the so-called ‘ratings machine,’ ” Trump said in a Nov. 29 statement.

“The reason is, they know they can’t win. All I have to do is lay out the facts — they are irrefutable,” Trump added. “I’ve supposedly won all my political debates, but this would be the easiest of them all! Swing state by swing state, they get decimated. This is the Hoax and the Scam and the Crime of the Century. Just remember, no takers!”

“If Democrats don’t immediately stop smash-and-grab robberies, which are taking place in their cities, the National Guard must be called out. There has never been such a thing that has happened in our Country. Large numbers of stores are leaving San Francisco and other cities. Some chains are closing most of their stores, it is all not even believable.” 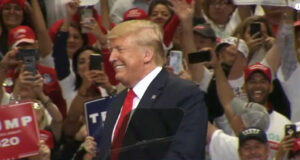 “Donald Trump is probably the single most investigated human being in human history and, to this point, not only have the Leftists been unable to find a single thing he’s done wrong but, as investigations continue, it becomes more and more obvious that the Leftists were the ones doing the things they accused President Trump of doing.

“At the same time that the Leftists are forced to dig and dig and dig in the hopes of finding SOMETHING they can use against him, Hunter Biden’s obvious and undeniable crimes (which include the Big Man) and the mafiosi-like acts of the Clintons, the murder of Jeffrey Epstein and more are not even investigated.

“There really are two justice systems in America. One for Leftists and one for the rest of us.”