The censorship gestapo at YouTube has suspended the account of Right Side Broadcasting (RSBN) just days before the network is set to broadcast former President Donald Trump’s rally in Georgia. 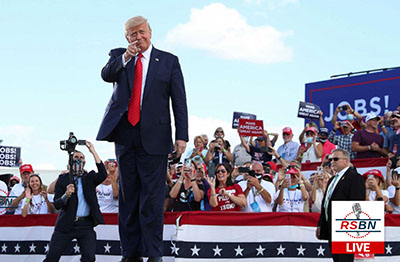 “On Tuesday afternoon, we were notified that our abilities to livestream and upload content have been suspended for one week after YouTube deleted two of our videos that allegedly violated their company policies,” RSBN said in a statement.

It is the second time in less than a month that YouTube’s censors have targeted RSBN. The account was previously locked for two weeks in early March after it carried Trump’s CPAC speech. Right Side was forced to delete the video, which had amassed more than 4 million views, because it supposedly violated YouTube’s “election misinformation” policy.

“Giving no respect to our First Amendment rights, YouTube claims these videos contain ‘elections misinformation’ and a lack of ‘sufficient’ context, warranting their removal,” RSBN said in response to YouTube’s actions. “Blatant Big Tech censorship will not deter RSBN from continuing to livestream President Trump’s upcoming rally in Commerce, Georgia. We are fully prepared to move ahead with all-day live coverage on Rumble. We will not allow the voice of President Trump and his supporters to be silenced.”

BREAKING: @RSBNetwork announced YouTube has suspended them and they will move ALL live coverage to Rumble for President Donald J. Trump’s rally this Saturday in Georgia.

The last time this happened, RSBN almost crashed our servers. Let’s try to do that again 🥳 https://t.co/ZCmKEV3bki

YouTube suspends Right Side Broadcasting Network days ahead of Trump rally added by Editor Two on March 23, 2022
View all posts by Editor Two →