A Wisconsin state Senate committee has issued a subpoena for the City of Madison’s 2020 election records.

The subpoena was issued by the Senate Committee on Elections, Election Process Reform and Ethics and was signed by state Senate Majority Leader Devin LeMahieu, state Senate President Chris Kapenga and committee chair Kathleen Bernier. It calls for the city to turn over all physical absentee ballot certificates for the November 2020 General Election and the results of tests on electronic voting machines used for the election. 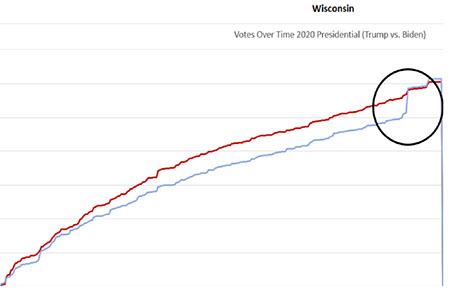 “Having to sign the third subpoena in the history of the Senate is not something I take lightly. It’s unfortunate and concerning that a few people running elections think they are more important than the electorate,” Kapenga said. “I sign this with the full effect of the law behind it. We are not playing games, and there will be consequences if they don’t comply.”

Gateway Pundit’s Joe Hoft noted: “Spread the word. There are now less than 10 months for every state and locality to obtain the ballots from the election or they are gone forever.”

“As we have already communicated to the Legislative Audit Bureau, they are welcome to examine copies of election records and can have access to all of the information that is on the original documents requested. All they have to do is take a three minute walk to our Clerk’s office. Federal and state laws require that our Clerk maintain control over these documents, and those laws carry potential criminal penalties for intentionally violating that duty. We believe the Legislature should listen to their own attorneys, who concluded that this was an accurate interpretation of the law. We do not intend to violate the law simply because Senator Kapenga demands that we do so.”

Wisconsin Assembly Speaker Robin Vos said last month that more subpoenas may be needed in the 2020 election investigation and that the work could stretch into 2022.

The nonpartisan Legislative Audit Bureau released its review of the 2020 election last month, making 48 recommendations and possible law changes to improve how elections are run, including adopting rules on whether ballot boxes should be allowed and whether missing information on absentee ballot envelopes should be filled in by election workers.

Vos said the audit showed that the Wisconsin Elections Commission is “mismanaged” and needs to be held accountable.

Meanwhile, Donald Trump spokeswoman Liz Harrington tweeted that the Wisconsin Election Commission has admitted that it instructed elections officials to break the law before and after the 2020 election.

“I have had discomfort…the day I had first suggested this that we will be essentially telling the clerks to break the law.” pic.twitter.com/9FVZtKXQqS

The Wisconsin Election Commission voted 5-1 to order nursing homes to break election laws during a Zoom meeting that was only posted to the public 1 hour before the vote pic.twitter.com/Eb0wU2yk2o