Trump White House advisor Garrett Ziegler said his research group Marco Polo has obtained a copy of the Hunter Biden laptop and has undertaken “what every single law enforcement institution in this country, especially and including the FBI, is not going to do,” which is compile and release a detailed historical record of everything contained on the “laptop from hell.” 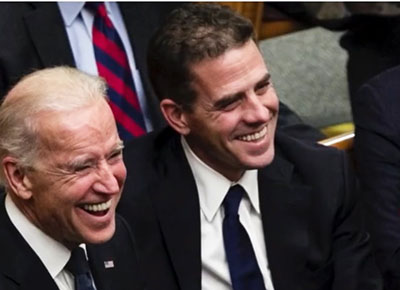 “In this laptop, here, we not only have foreign collusion, but we have money laundering, sex crimes between Hunter Biden and multiple women (including his under-aged niece), and what we want to do is something that every single mainstream outlet is not going to do. And they’re not going to do it and they’ve had the chance now for almost a year because a lot of them have had it since October,” Ziegler said.

“What we want to do is for the historical record … so when people read about America they know that Joe Biden, who was the Manchurian candidate and who became the installed Manchurian president, exactly how he is compromised. And his son Hunter is one of the most corrupt, disgusting members of any American First Family in the history of the country.”

The Washington Times, which reported it also obtained a copy of the laptop, noted in an April 25 report that “when Hunter Biden’s laptop emerged with evidence of drug use and accusations of nudity in the presence of a teenage girl in his household, law enforcement agencies punted rather than aggressively investigate the state’s most powerful political family.”

“As soon as the police department in President Biden’s home county received the laptop in October 2020, police officials turned it over to Delaware Attorney General Kathy Jennings, who promptly handed it off to the FBI’s Baltimore field office,” the report notes. “Two years later, there is still no evidence that Delaware law enforcement or child welfare officials took action to determine whether Hunter Biden’s household had a child endangerment situation.”

Ziegler said the Marco Polo researchers “want to — once and for all — lay out exactly how the Biden family is compromised and how that relates to the election fraud that we just went through, in which I think there’s no more important topic to delve into.”

Ziegler said he hoped Marco Polo’s detailed compilation from the Hunter Biden laptop will be complete by Thanksgiving.

“We think it is a duty of ours because we have this laptop and we don’t want it to be buried,” Ziegler said. “And we are going to be releasing large portions of it so that people can go through it themselves. We don’t want to guard this thing. I think every American has the right to know what’s on this laptop.”

Why does Hunter Biden’s laptop matter? Trump White House staffer explains added by Editor Two on May 13, 2022
View all posts by Editor Two →