The deplorables of America will always be on the side of Donald J. Trump because he never stops fighting and always gets in the last word, a columnist noted.

Case in point is the lawsuit Trump filed last week against the architects of the Russia collusion hoax. 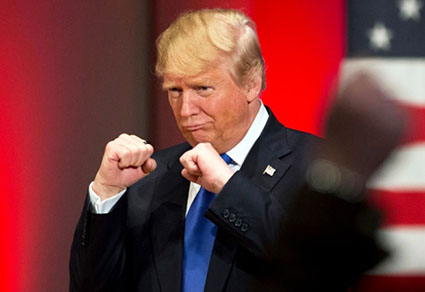 The 108-page lawsuit against Hillary Clinton, the Democratic National Committee, Debbie Wasserman Schultz, Fusion GPS and others, alleges that Trump suffered more than $24 million in damages and from lost business due to the 47 defendants’ “maliciously conspired” “false narrative” of Russian collusion.

“This is the revenge of a nation of Trump supporters who were sickened by the deep state shenanigans that plagued his administration from day one — from even before day one, to tell the truth, if you count the catcalls from Democrats who wanted him impeached before he was even inaugurated,” Cheryl K. Chumley noted in a March 26 op-ed for The Washington Times.

“The Democrats, in collaboration with their partners in the media, in partnership with their collaborators in the intelligence community, managed to keep alive such now-debunked lies as pee tapes and prostitutes and Trump’s secret communications with Russian financial authorities. On that last, attorney Michael Sussmann was arrested for lying,” Chumley noted.

Sussmann is named as a defendant in Trump’s lawsuit.

So is Igor Danchenko, the Russian analyst who worked with Christopher Steele and Democrat operatives to fabricate and spread the Trump dossier.

Steele is also named as a defendant in Trump’s lawsuit.

So is Peter Strzok, whose texts to his partner-in-adultery Lisa Page showed a determined bias against Trump among many in the intel community.

Page is also a named defendant in the lawsuit.

So is James Comey.

So is Andrew McCabe.

So is Bruce Ohr.

“These government officials were willing to abuse their positions of public trust to advance the baseless probe to new levels, including obtaining an extrajudicial FISA warrant and investigating the commencement of an oversight investigation headed by Special Counsel Robert Mueller,” Trump’s complaint states. “As a result, Donald J. Trump and his campaign were forced to expend tens of millions of dollars in legal fees to defend against these contrived and unwarranted proceedings.”

Chumley pointed out that “it wasn’t just Trump’s wallet that was scorched by the witch hunt. The American taxpayers lost millions and millions and millions of dollars, both in direct payments to Team Mueller and in salaries for congressional members who conducted sham hearings about fabricated collusion charges, when they could have been doing more appropriate business for the people. Maybe the American people should join the suit, or file one of their own, demanding a refund.”

“Trump’s lawsuit against Clinton and 47 others is a predictable mess,” one Washington Post analysis said.

“Recognizing Trump’s new anti-Clinton lawsuit for what it is,” another MSNBC headline snarked.

But, as Chumley noted, “like all things having to do with Trump, the Left is missing the point.”

“For Americans, for Trump supporters, it’s not so much about winning the case. It’s about making the fight. It’s about taking the fight that the left created, fabricated and waged for so many years against Trump — and throwing it back in their faces,” Chumley wrote. “It’s about the defense of the deplorable.”

Whether or not he wins the lawsuit, “Trump wins with his supporters,” Chumley wrote. “He wins because he fights. And that’s what counts most.”