A Feb. 11 filing by special counsel John Durham shows that Hillary Clinton’s campaign paid a technology company to spy on Donald Trump in an effort to establish an “inference” and “narrative” to link Trump to Russia.

Durham filed a motion on Feb. 11 focused on potential conflicts of interest related to the representation of former Clinton campaign lawyer Michael Sussmann, who has been charged with making a false statement to a federal agent, Fox News reported on Saturday.

In a section titled “Factual Background,” Durham’s filing reveals that Sussmann “had assembled and conveyed the allegations to the FBI on behalf of at least two specific clients, including a technology executive (Tech Executive 1) at a U.S.-based Internet company (Internet Company 1) and the Clinton campaign.”

Trump White House adviser Garrett Ziegler noted in a Telegram Post that Rodney Joffe is the person referred to as “Tech Executive-1” in Sussman’s indictment.

The new Durham filing, Ziegler added, shows that “Joffe et al. monitored Trump’s Internet traffic while he was President of the United States.”

Trump said in a statement:

“The latest pleading from Special Counsel Robert Durham provides indisputable evidence that my campaign and presidency were spied on by operatives paid by the Hillary Clinton Campaign in an effort to develop a completely fabricated connection to Russia. This is a scandal far greater in scope and magnitude than Watergate and those who were involved in and knew about this spying operation should be subject to criminal prosecution. In a stronger period of time in our country, this crime would have been punishable by death. In addition, reparations should be paid to those in our country who have been damaged by this.”

Durham’s filing revealed that Sussmann and Tech Executive-1 (Joffe) had met and communicated with another law partner, who was serving as General Counsel to the Clinton campaign. Sources told Fox News that lawyer is Marc Elias, who worked at the law firm Perkins Coie.

Durham’s filing states that in July 2016, the tech executive worked with Sussmann, a U.S. investigative firm retained by Law Firm 1 on behalf of the Clinton campaign, numerous cyber researchers and employees at multiple internet companies to “assemble the purported data and white papers. In connection with these efforts, Tech Executive-1 exploited his access to non-public and/or proprietary Internet data. Tech Executive-1 also enlisted the assistance of researchers at a U.S.-based university who were receiving and analyzing large amounts of Internet data in connection with a pending federal government cybersecurity research contract.”

The filing continued: “Tech Executive-1 tasked these researchers to mine Internet data to establish ‘an inference’ and ‘narrative’ tying then-candidate Trump to Russia. In doing so, Tech Executive-1 indicated that he was seeking to please certain ‘VIPs,’ referring to individuals at Law Firm-1 and the Clinton campaign.”

Attorney Lin Wood noted in a Telegram post: “I have a curious mind. I always urge you to also have a curious mind! Ask questions. Research for information. Connect the dots from the information you learn in order to form your own conclusions. Your independent conclusions formed from this process will be much stronger in your mind than simply accepting the conclusions of others, especially in an era of propaganda.”

Wood added: “My curious mind leads me to wonder how many individuals involved in the illegal attempted coup of President Trump when they unlawfully spied on him will also be found in time to be connected to the effort to steal the 2020 Presidential election? My research reveals that treason is punishable by death and our law still allows for that sentence to be administered by an execution by firing squads. Just sayin’.”

On Feb. 12, Trump added a footnote to the news that is getting heavy coverage by the alternative media while being ignored by the major corporate and social media outlets:

It will be interesting to see how it was covered by the media and what Mitch McConnell and the RINOs will be doing about it. This is an insult to the Republican Party, but a far greater insult to our Nation.

Kash Patel, who as an investigator for Rep. Devin Nunes was responsible for uncovering much of the Russiagate scandal, issued the following statement: 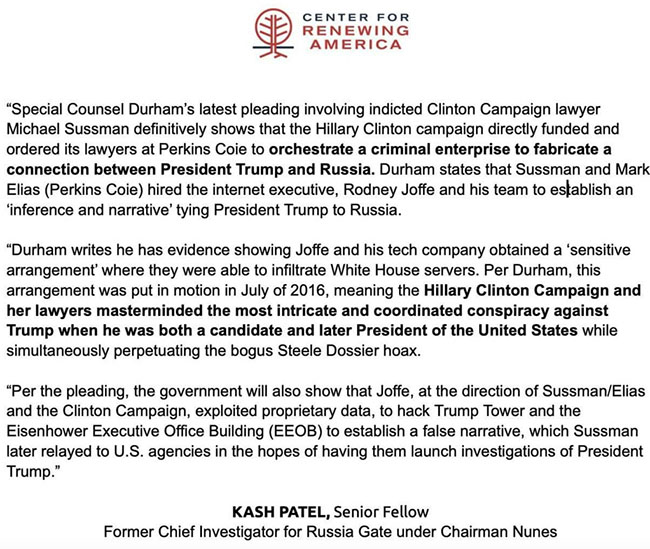