What happened in Arizona? Cyber Ninjas disband; Audit ‘sabotaged’ from the ‘outset’?

Cyber Ninjas, which carried out the high stakes audit of Maricopa County’s ballots in the 2020 presidential election in Arizona, has disbanded.

“Cyber Ninjas is shutting down. All employees have been let go,” Rod Thomson, the company’s representative, said on Thursday. 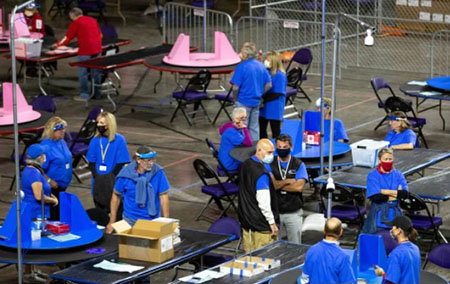 Cyber Ninjas shut down as Maricopa County Superior Court Judge John Hannah said he would levy a $50,000 fine if the company did not immediately turn over public records related to the audit.

Professor David Clements noted in a Jan. 8 Telegram post that, after speaking with Cyber Ninjas CEO Doug Logan, he came to the conclusion that Logan was “neutralized” and the the audit was “sabotaged”  from the “outset” by officials in the Arizona state Senate and the 501(c)(4) political action group America Project.

“I spoke with Cyber Ninjas Doug Logan tonight,” Clements wrote. “I commend Doug for calling and having the courage to answer my questions. Doug is affable and civil. But regardless of his affable nature, the conversation confirms what I suspected, and I stand by my previous assertions. The Maricopa audit was infiltrated, co-opted, and neutralized to have minimal effect.”

Clements said it was “tragic” as there were “so many honest, good, and honorable folks that worked on the audit with integrity.”

The efforts of those people, Clements said, “were sabotaged by key members of the AZ Senate, and the America Project.”

Clements added that he believed Logan “was neutralized from the outset. This doesn’t make him a bad person, but his agreeable nature made him the perfect target to control, manipulate, and whittle away at. The result was an incomprehensible report, where the author was intimidated from using the word ‘fraud.’ ”

The result, Clements continued, “was an author that was convinced he could not recommend decertification because he didn’t have 100 percent of the necessary election items that were subpoenaed. In other words, bad actors that destroyed and hid evidence dictated the end result we all witnessed. Thus, the 100 percent evidentiary standard created by Doug Logan was a death sentence for your electoral voices.”

Because Logan’s standard “didn’t take into account that destruction of evidence, in and of itself, should be the primary grounds to decertify,” Clements wrote.

Clements said he also had been informed that Jovan Pulitzer’s findings “were not incorporated into the final Maricopa report because his work did not meet an acceptable standard of quality. Thus, he was not asked to testify either. For those waiting for Jovan’s final report or testimony to make an impact on the AZ Senate, it won’t. The Senate already announced their decision to not even attempt a vote to decertify. This decision was made months ago.”

Related: Unreported by Fox and Big Media: What the final Arizona Audit report revealed and what it did not, September 26, 2022

The senators instead “are working on legislation that cannot, and will not, fix the real problem, because they never got the routers and splunk logs necessary to identify and solve the real problem to begin with,” Clements wrote. “The damnable Dominion machines are the primary culprit of how our voices were stolen. Unless a miracle occurs in AZ, voters will be voting on Dominion machines in the next primary, in another rigged election.”

Present with them on day 1 was Doug Logan.

Millions of dollars raised and spent, and still the audit is shrouded in secrecy.

Meanwhile, The judge found Cyber Ninjas in contempt for its failure to turn over documents in response to a lawsuit filed by the Arizona Republic newspaper.

“The court is not going to accept the assertion that Cyber Ninjas is an empty shell and that no one is responsible for seeing that it complies,” Hannah told Wilenchik, according to an AP report. Hannah said the fines would begin to accrue Friday and could be applied to individuals as well as the company, according to a Business Insider report.

Cyber Ninjas had maintained it was a private company that wasn’t subject to the public records law.

What happened in Arizona? Cyber Ninjas disband; Audit ‘sabotaged’ from the ‘outset’? added by Editor Two on January 9, 2022
View all posts by Editor Two →