Unreported by Fox and Big Media: What the final Arizona Audit report revealed and what it did not

If the shrinking audiences of the corporate mainstream media, including Fox News, caught the scant reports, the audit of Maricopa County’s 2020 election ballots only served to reaffirm Joe Biden’s alleged victory in Arizona and “debunked” claims of a stolen election, if that’s possible.

What did the Big Box Media leave out of its reporting on the final Arizona Audit findings? 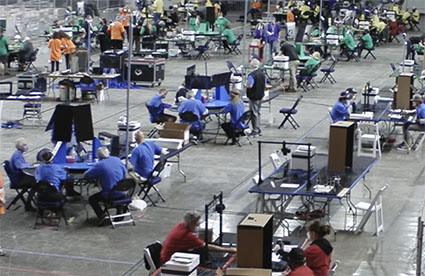 The preamble to our Constitution reminds us that our nation is always pursuing greater perfection, seeking to establish “… a more perfect Union” so that we can “…secure the Blessings of Liberty to ourselves and our Posterity.” Nothing is more essential in preserving liberty than free and fair elections. To that end, Cyber Ninjas was engaged by the Arizona Senate to audit the 2020 General Election and determine in what areas legislative reform may enhance our current process so that our elections may continue to get better, becoming “more perfect.” In doing so, it was our goal to improve confidence in American elections by identifying areas where legislation could resolve any identified issues.

This audit has been the most comprehensive and complex election audit ever conducted. It involved the hand counting of 2.1 million ballots, a forensic paper inspection of all ballots, a forensic review of the voting machines, and an in-depth analysis of the voter rolls and the 2020 General Election final files.

What has been found is both encouraging and revealing. On the positive side there were no substantial differences between the hand count of the ballots provided and the official election canvass results for Maricopa County. This is an important finding because the paper ballots are the best evidence of voter intent and there is no reliable evidence that the paper ballots were altered to any material degree.

Based on our other findings, however, we recommend that the Legislature tighten up the election process to provide additional certainty going forward, and that several specific findings of our audit be further reviewed by the Arizona Attorney General for a possible investigation. Such other findings include the following:

• None of the various systems related to elections had numbers that would balance and agree with each other. In some cases, these differences were significant.
• There appears to be many 27, 807 ballots cast from individuals who had moved prior to the election.
• Files were missing from the Election Management System (EMS) Server.
• Ballot images 284,412 on the EMS were corrupt or missing.
• Logs appeared to be intentionally rolled over, and all the data in the database related to the 2020 General Election had been fully cleared.
• On the ballot side, batches were not always clearly delineated, duplicated ballots were missing the required serial numbers, originals were duplicated more than once, and the Auditors were never provided Chain-of- Custody documentation for the ballots for the time-period prior to the ballot’s movement into the Auditors’ care. This all increased the complexity and difficulty in properly auditing the results; and added ambiguity into the final conclusions.
• Maricopa County failed to follow basic cyber security best practices and guidelines from CISA.
• Software and patch protocols were not followed.
• Credential management was flawed: unique usernames and passwords were not allocated.
• Lack of baseline for host and network activity for approved programs, communications protocols and communications devices for voting systems.

Arizona state Sen. Kelly Townsend said that “what we learned was that there was a myriad of issues with the counting process that undermine the confidence in the true and accurate count of this election.” Some of the issues “that jump out immediately,” Townsend said, are as follows:

• Deleted / purged files — The timing and deletion of files the day before the 2/2/21 audit. Maricopa county purged the machine records the day before the audit started. Many .exe and .dll files (approximately 1500) were either deleted or modified.
• No security or credential management. There were shared accounts and passwords which made the identification of those deleting or purging files difficult, but not impossible.
• Duplicates ballots were grossly mismanaged, and our laws were broken regarding this important part of our election process.
• Chain of custody was not accurately kept, making it impossible who touched what and when.
• Envelopes without signatures, images of ballot envelopes with an apparent approval stamp behind the basic graphics of the envelop, suggesting tampering.
• Connectivity to the internet has been established, in violation of Arizona law and contrary to what we have been told about the system.
• Sloppy caretaking of ballots, missing batches in boxes, batches in boxes not listed on the box or county list.

These are just a few of the many issues brought up today and necessitate a dramatic change in the way we oversee our elections, and how we hold those accountable who have broken our laws. Most importantly, whenever there is malfeasance and skullduggery, we must both nullify that election and repeat it with one more securely conducted, and we must move forward with indictments of hose who perpetrated this fraud against us.

After reading Arizona’s full forensic audit, reading the Canvassing audit, listening to the AZ senate hearing, there is ZERO doubt left the Arizona 3 NOV election MUST BE decertified and the AZ electors for the presidency of the United States MUST BE recalled and allocated to President Trump.

Law Professor David Clements took note of the context of the audit report:

What responsibility does AZ Senator Karen Fann have in failing to compel production of the routers months ago through a court order? Her strategy appeared to be ‘issue more subpoenas’ and be ignored. Why did the AZ Senate (Fann) allow themselves to be intimidated by Merrick Garland from doing a canvass? Either they were intimidated and revealed themselves to be cowards, or they secretly never intended to do a canvass. The latter is even worse, and I suspect it is true. Why did the AZ Senate try to muzzle Doug Logan, it’s chief auditor, and produce a heavily watered-down report? Why is the AZ Senate trying to muzzle Jovan Hutton Pulitzer’s kinematic findings on whether we had counterfeit ballots? We already have enough to decertify the election, in spite of Karen Fann, but she needs to answer these questions. Not a good look Karen. Not a good look.

Absentee votes are supposed to be received before Election Day and opened only on Election Day. No ballots count if received after Election Day (although there may be some additional time allowed for military absentee ballots).

If you vote early in person, the machine vote is not calculated until Election Day.

Governors’ declarations of a Covid emergency cannot change the law — it has to be changed by the legislative branch. It was not. Obviously lesser state executive officials cannot make private agreements to change the statutory law regarding one Election Day.

For this reason alone, I believe the 2020 Arizona vote was unlawful.

Now let’s talk fraud. Stay with me. We learned that an ample amount of highly questionable votes were discovered to potentially change the winner. And that was what was found. Who knows how many votes were illegal?

If the election was conducted lawfully (“most secure election ever”), why did Maricopa officials not cooperate with the auditors’ requests for relevant materials and information. Because they have something to hide — evidence of illegality. Again, the Maricopa officials violated the law.

The cherry on the cake was the clear evidence that the machines were not properly certified and were accessed via the Internet. Pretty damning when an expert concludes that a baby hacker could have hacked the election system in minutes. That is not a lawful election.

Where do these observations lead us? The evidence today was conclusive — the 2020 Arizona election was unlawful. What must We The People do with what we learned today?

There is only one lawful course of action for Arizona to take — the 2020 election results must be decertified. If the game is played illegally, the score is illegal regardless of who “won” the illegal game. Illegal is illegal. Always has been. Always will be.

Now, do you think the enemy only cheated in Arizona? Of course not. There must be forensic audits and canvassing in key counties in EVERY state. We The People must demand such audits from state legislators. We The People must be relentless in our demands until OUR REPRESENTATIVES do OUR will. They work for us. They serve us. They do the will of the People.

If We The People do not fix 2020, every day that passes is a day when those who claim to represent us illegally hold office.

Illegally elected representatives do NOT represent We The People. They only represent the nefarious actors who rigged the election. When our government officials are illegal, we as a nation have lost the rule of law. The foundation of the rule of law in the United States is lawful elections.

So the Arizona audit report must be the beginning. The beginning of efforts by We The People to restore law and order to our nation. Every state must be audited. Every state election must be investigated for illegality. Every state legislature must act.

The decision to FIX 2020 is the choice between whether you want a nation of law and order or a nation of lawlessness. I pray We The People choose wisely.

2020 election, Maricopa County, Unreported by Fox and Big Media: The final Arizona Audit report and what it means, WorldTribune.com

Unreported by Fox and Big Media: What the final Arizona Audit report revealed and what it did not added by Editor Two on September 26, 2021
View all posts by Editor Two →