In a speech to the AFL-CIO this week, Joe Biden was at his angry old man best as he shouted: “I don’t want to hear anymore of these lies about reckless spending. We’re changing people’s lives!”

Yes, Team Biden is indeed “changing people’s lives” although a better verb might be “wrecking.” 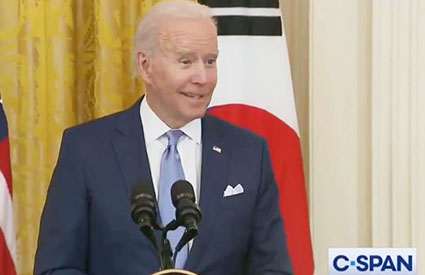 Millions of Americans already struggling to put food on the table and fill up their gas tanks have another major problem to face thanks to Team Biden’s Hugo Chavez-style policies aimed at destroying the world’s strongest economy.

After the Federal Reserve on Wednesday raised interest rates by 0.75 percent, mortgage rates spiked overnight by the biggest margin in 35 years.

Mortgage buyer Freddie Mac reported Thursday that the 30-year rate climbed from 5.23% last week to 5.78% this week, the highest its been since November of 2008 during the housing crisis. Wednesday’s rate hike by the Fed was its biggest in a single action since 1994.

“That’s certainly going to change people’s lives, and not for the better,” Ed Morrissey wrote in a June 16 op-ed for Hot Air. “And it’s not just in the way that higher mortgage rates will lock out a lot of potential home buyers, although that certainly is the case. It will also mean that people who purchased homes over the last few years will have much less leverage to relocate, thanks to the impact that the big jump in mortgage rates will have on their ability to buy a new house. Those who have to relocate for jobs will suddenly find themselves losing the buying power they would have otherwise gained in taking a new job, which could slow down hiring … assuming a recession doesn’t pop the jobs bubble of the post-pandemic period, too.”

“The slowdown on refinancing is equally worrying, if not more so. People refinance for many reasons, but almost all of them involve either purchasing power. Refinancing for debt consolidation saves money, for instance, while refinancing for home improvements prompts significant big-ticket spending. Much of that will dry up in the coming months, which likely will result in a significant slowdown of consumer spending in the short to medium term.

“That won’t help the stock markets either, and that brings us to fixed-income households that depend on stocks and bonds for their buying power. This bear market has already wiped out some of the wealth accrued by Americans over the last few years, and most of them aren’t millionaires either. Most of them are people who have spent decades investing in IRAs and 401K retirement plans, who now may need to cut back spending as their net worth plummets.