Donald Trump “has made perhaps the biggest comeback in history. And he did it far faster than anyone imagined possible,” columnist Wayne Allen Root noted. 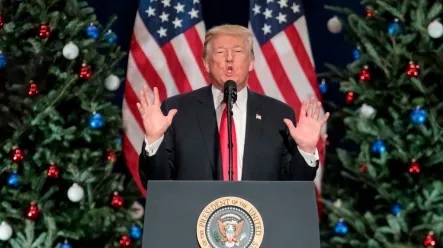 In all the recent polling, Trump is beating Joe Biden in a prospective 2024 rematch. A Rasmussen poll shows Trump up, 45 percent to 32 percent.

A YouGov survey finds Trump is more admired than either Biden or Pope Francis.

“Don’t trust the polls? Ask bettors around the world,” Root wrote. “At UK’s gigantic sportsbook Ladbrokes, where billions of dollars are bet, Trump is now a huge 3-to-1 favorite to beat Biden in the 2024 election.”

This is all after Big Media claimed Trump’s legacy “was ruined, his brand destroyed,” after Jan. 6 and that “he should go to prison as a traitor,” Root wrote.

Trump’s comeback has not been confined to the political arena.

“His financial comeback is even bigger. Have you heard about that? Of course not,” Root noted.

In just one year’s time, despite “nonstop slander by the media … Trump is now richer than ever before,” Root wrote.

Trump’s new social media venture turned public company DWAC has tripled his net worth. According to Bloomberg, Trump was worth $2.5 billion dollars. But he now owns a 58 percent stake in DWAC. Bloomberg says that stake is worth as much as $4.8 billion.

Trump also sold his stake in his Washington, D.C. hotel. The Washington Post reports Trump could profit over $100 million from the transaction.

Trump’s speaking tour with Bill O’Reilly is selling out sports stadiums and grossing over $2 million per day.

Root concluded: “So, I say to all Trump warriors, ‘Merry Christmas to all and to all a good night.’ ”