“We’re not going to let our country be destroyed by lunatics,” former President Donald Trump declared on Saturday at a rally in Selma, North Carolina which was ignored by major media. 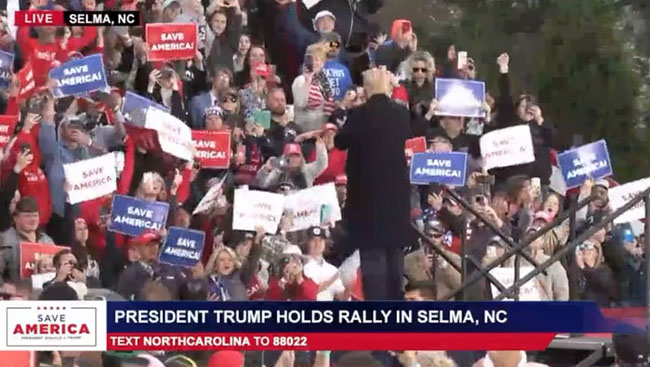 Trump touched on a number of topics (see video below) which Big Tech and corporate media censors insist Americans shouldn’t be talking or hearing about but which clearly sparked a chord in North Carolina:

• Warning that “we won’t have a country anymore” if election reform is delayed, Trump called for paper ballots thereby violating the unspoken media rule that the idea of voting data fraud via Internet-connected voting machines and software cannot be discussed in public. He also called for an end to the use of ballot drop boxes and said the use of absentee ballots should be strictly limited to military personnel serving  overseas and extenuating circumstances.

• He called for “universal voter ID at federal, state and local levels.”

• Trump characterized as explosive new documentaries on the 2020 election by D’nesh D’Souza and Citizens United.

• “People are afraid to talk about it” but: No men in women’s sports, he said. Not only that but,

• “No teacher should be allowed to teach far Left gender theories to children without parental consent. It’s truly child abuse …”

• School choice: Parents should be given the right to opt out of indoctrination.

• Trump called for a permanent end to vaccine mandates. There should be no government interference in personal decisions.

• As he did in the final months of his term, Trump called for a renewed ban on critical race theory in schools, military and at all levels of government.