Dr. Anthony Fauci, director of the National Institute of Allergy and Infectious Diseases, said he would prescribe Chloroquine to coronavirus patients. 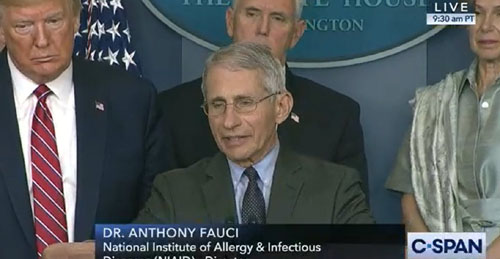 In an interview on AM 990 in Philadelphia on Tuesday, Fauci spoke with Townhall columnist and morning host Chris Stigall about the hope in the hydroxychloroquine drug that has been making headlines.

Stigall asked: “If you’re a doctor listening to me right now and a patient with coronavirus feels like they want to try that, and you’re their doctor, you’re not Anthony Fauci the guy running the coronavirus task force, would you say ‘alright, we’ll give it a whirl?’ ”

Fauci responded: “Yeah, of course, particularly if people have no other option. These drugs are approved drugs for other reasons. They’re anti-malaria drugs, and they’re drugs against certain autoimmune diseases like lupus. Physicians throughout the country can prescribe that in an off-label way. Which means they can write it for something it was not approved for.”

“This blows away the newest, fake non-controversy between Fauci and the president that he is unhappy that the president announced the possibility that hydroxychloroquine could provide a treatment option for patients suffering from COVID-19,” columnist Larry O’Connor wrote for TownHall on Wednesday. “Of course, there needs to be further testing on the efficacy of this drug and this treatment, the president has always acknowledged that and so has Fauci, he did so in the interview with Stigall.”

But, O’Connor noted, when pressed on the issue in the most fundamental way, “Would you, as a doctor, prescribe this for your patient?” Fauci said “yes.”

Do you see this reported anywhere?

“In the face of a global pandemic, the media couldn’t possibly have a day go by without trying to bring down President Trump,” O’Connor wrote. “The priority is to drum up some kind of invisible drama for political editors, writers and producers to latch onto instead of providing sober, contextualized data for their readers and viewers. They don’t know how to report on a pandemic, only on a special counsel investigation or impeachment. That’s what they were hired to do. It’s all they know.”

O’Connor concluded: “So, in the face of a public health crisis and a government task force focused on stopping the spread of a virus, they go to their regular playbook. Use anonymous leaks from people hostile to the president to sew dissension, division, and mistrust. That kind of destructive political journalism will win you Pulitzers on a normal day in Washington. But, these are not normal days.”