Apparently, a University of Washington infographic featuring a blonde, white cheerleader on a list of “do’s and dont’s” for cheer and dance team tryouts was too much for the grievance industry to handle. 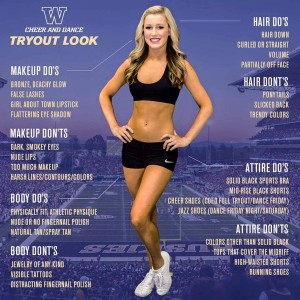 Potential UW cheerleaders were advised to have their “hair down,” but “partially off” the face while maintaining plenty of “volume” and to make sure to hide their tattoos and avoid trendy colors and “too much makeup.”

Also, the list says, don’t forget to be “physically fit” with an “athletic physique.”

Critics immediately pounced on the infographic, which was posted to the university’s Facebook page, saying the image “objectified women while perpetuating sexist, Anglo-centric beauty ideals.”

“I can’t believe this is real,” one of the aggrieved, Jazmine Perez, the director of programming for the university’s student government, told the Seattle Times.

“One of the first things that comes to mind is objectification and idealization of Western beauty, which are values I would like to believe the University doesn’t want to perpetuate. As a student of color who looks nothing like the student in the poster, this feels very exclusive.”

A Twitter user chimed in: “Thanks UW for setting women back 100 years!”

Another tweeted: “Oh and don’t forget to be white! Like that wasn’t implied. Disgusting UW decision on cheerleader qualifications.”

Not everyone agreed with the aggrieved.

“It’s basically a job interview,” Nathan Harding wrote on the student government’s Facebook page. “Search online ‘How to dress for a Job Interview’ and tell me the criteria listed isn’t common sense for that situation – as is the cheerleader infographic above. Being offended over the smallest of things seems like an all too common pastime these days.”

The infographic was deleted a day after it was posted and three days ahead of cheerleader tryouts at the university, according to the Times.

UW athletics department officials said the image was designed “in response to a high volume of student questions about cheer and dance team tryouts” and noted that the graphic was removed once the department “determined that some of the details and descriptions provided were inconsistent with the values of the UW spirit program and department of athletics.”

The university’s student government said in its own statement that the flyer “does not reflect the values of the University of Washington.”

“In the midst of protests and conversations with the administration in order to provide a more inclusive environment for all of our students, this goes against everything that many students have been working so hard for,” the statement said. “An advertisement such as this completely objectifies women and creates barriers that only perpetuates the inaccessibility of opportunities that should be open for every student on this campus.

“We will be doing everything in our power to make it very clear to our students (both incoming and current) that this is not in any way representative of our university and our campus climate. We hope the administration will do the same.”

University deletes cheerleader tryout ‘do’s and don’ts’ after PC outrage added by Editor One on May 1, 2016
View all posts by Editor One →