Amid an escalation of the China-U.S. trade war, China’s yuan currency on Oct. 30 hit a 10-year low against the U.S. dollar. 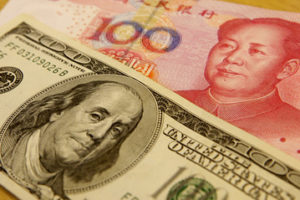 Bloomberg reported that the United States is preparing to announce tariffs on all remaining Chinese imports by early December if scheduled talks next month between U.S. President Donald Trump and Chinese supreme leader Xi Jinping falter.

“The news that the U.S. is threatening a new round of tariffs has weighed on market sentiment,” said Zhou Hao, senior emerging market economist at Commerzbank in Singapore.

The Chinese currency has weakened about 9 percent over the past six months, moving closer to the 7 per dollar level which was last hit during the global financial crisis in 2008, Reuters reported.

The 7 yuan to the dollar level is seen as a key psychological threshold for traders and could be the trigger for renewed attacks by Trump, analysts say.

“Investors will be thrown out of their comfort zone,” said Kevin Lai, a Hong Kong-based economist at investment bank Daiwa Capital Markets. “When it breaks seven, you’re going to see a lot more selling pressure.”