A terrorist plot to blow up a rally in Paris sponsored by an Iranian opposition group was approved by Iran’s ruling mullahs, U.S. officials and the sponsor of the June 30 rally said.

Belgian authorities foiled the plot when when they detained a couple with ties to Iran who had been given explosives by an Iranian diplomat based in Austria. 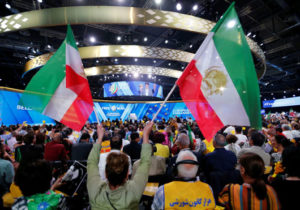 Prosecutors said the two were directed by Assadolah Assadi, who was posted at Iran’s embassy in Vienna.

After the couple was arrested in Belgium, German authorities apprehended Assadi, who had passed the explosives to the selected bombers, prosecutors said.

The U.S. “went to Saudi Arabia to coordinate stronger pressure on Iran. We discussed new ways to deprive the regime of revenues to terrorize people and to terrorize other nations,” said the official who was attending the NATO conference in Brussels.

“We discussed how Iran uses embassies as cover to plot terrorist attacks. The most recent example is the plot that the Belgians foiled, and we had an Iranian diplomat out of the Austrian Embassy as part of the plot to bomb a meeting of Iranian opposition leaders in Paris,” the official said.

The official added: “The United States is urging all nations to carefully examine diplomats in Iranian embassies to ensure their countries’ own security. If Iran can plot bomb attacks in Paris, they can plot attacks anywhere in the world, and we urge all nations to be vigilant about Iran using embassies as diplomatic cover to plot terrorist attacks.”

The National Council of Resistance of Iran (NCRI), which hosted the Paris rally that included U.S. speakers Rudy Giuliani and Newt Gingrich, quoted its intelligence sources inside the country as saying that Iran’s supreme leader, Ayatollah Ali Khamenei, and President Hassan Rouhani approved the plan to bomb the “grand gathering” of about 25,000 people.

U.S. Secretary of State Mike Pompeo tweeted: “Iran’s regime wants to start trouble wherever it can. It’s our responsibility to stop it.”

Pompeo added: “We ask our allies and partners to join our economic pressure campaign against Iran’s regime. We must cut off all funding the regime uses to fund terrorism and proxy wars. There’s no telling when Iran may try to foment terrorism, violence and instability in one of our countries next.”