In Philadelphia, Pennsylvania on July 4, the Continental Congress adopted the Declaration of Independence, which proclaims the independence of the United States of America from Great Britain and its king.

The declaration came 442 days after the first shots of the American Revolution were fired at Lexington and Concord in Massachusetts and placed on the record the conflict that would lead to the establishment of a new nation by its first patriots. 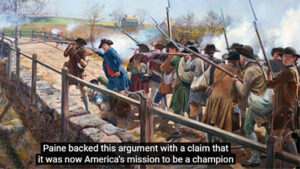 The first significant expression of American opposition to British policy came in 1765 after Parliament passed the Stamp Act, a tax to underwrite a standing British army in America.

Colonists convened the Stamp Act Congress in October 1765 to vocalize their opposition to the tax with the demand: “No taxation without representation.”

When the Stamp Act was enacted, most colonists called for a boycott of British goods, and some organized attacks on the customhouses and homes of tax collectors. After months of protest in the colonies, Parliament voted to repeal the Stamp Act in March 1766.

Most colonists complied with British rule until Parliament passed the Tea Act in 1773, a bill which granted the East India Company a tea tax break and a monopoly on the American tea trade.

Many colonists saw the act as a prime example of tax tyranny. Patriots in Massachusetts responded with an insurrection: The “Boston Tea Party,” saw British tea valued at some 18,000 pounds dumped into Boston Harbor.

Angered by the Boston Tea Party and its destruction of British property, the British Parliament, passed the Coercive Acts, also known as the Intolerable Acts, in 1774.

The colonists subsequently called the first Continental Congress to discuss a unified American resistance to the British.

Massachusetts led the way, forming a shadow government and organizing militias to push back against the increasing British military presence.

In April 1775, Thomas Gage, the British governor of Massachusetts, ordered British troops to Concord, Massachusetts, where a Patriot arsenal was known to be located.

On April 19, 1775, the British regulars were met by a group of American militiamen at Lexington, and the first shots of the American Revolution were fired (“The shot heard round the world.”)

At first both sides regarded the conflict as a civil war within the British Empire.

However, Parliament refused to negotiate with the Americans and hired German mercenaries to reinforce British forces to suppress the rebellion.

In response, the Continental Congress began to pass acts to void British authority.

In January 1776, Thomas Paine published “Common Sense,” an pamphlet that argued for American independence and proved commercially viable. It “went viral,” selling more than 500,000 copies in a few months.

In the spring of 1776, support for independence spread throughout the colonies. The Continental Congress called for states to establish their own governments, and a five-man committee was asked to draft a declaration.

The Declaration of Independence was largely the work of Thomas Jefferson in Virginia.

In advocating American independence, Jefferson referenced John Locke, an advocate of natural rights, and others. The Declaration had two sections, a statement of principles and a list of grievances that justified the statement.

The first section was to inspire freedom-seekers worldwide: “We hold these truths to be self-evident, that all men are created equal, that they are endowed by their Creator with certain unalienable Rights, that among these are Life, Liberty and the pursuit of Happiness.”

On July 2, 1776, the Continental Congress voted to approve a Virginia motion calling for separation from Britain. The dramatic words of this conclusion were added to the the Declaration of Independence. On July 4, the declaration was formally by 12 colonies. New York approved it on July 19 and it was signed on Aug. 2, 1776.

The Revolutionary War would last for five more years ending with the final victory at Yorktown in 1781. In 1783, with the signing of the Treaty of Paris with Britain, the United States formally became a free and independent nation.

Tyranny, shots ‘heard round the world’ and pamphlet that ‘went viral’ inspired ‘Declaration’ added by Editor One on July 4, 2022
View all posts by Editor One →