President Donald Trump’s star – actually several dozen of them – re-appeared on the Hollywood Walk of Fame on Aug. 9, a report said. 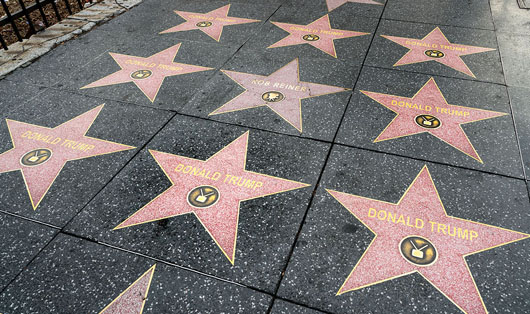 After the president’s star had been destroyed on several occasions and the West Hollywood City Council voted to remove it, an anonymous conservative street artist and his group which call themselves “The Faction” created and placed the stars.

“Rip up the president’s Walk of Fame star or try to have it removed – like you’re the mayor of West Hollywood or something – and 30 more will pop up,” the artist told The Hollywood Reporter.

“The Faction”, who are allies of conservative artist Sabo, spent $1,000 on the stars, which they printed on sheets of floor vinyl with adhesive backing, the report said. They said their mission was partially financed by “a young and anonymous entrepreneur.”

The artists laminated the vinyl stars and placed them on blank squares on the Walk of Fame. They kept the stars covered until all were secured into place so that onlookers would not know exactly what was happening, the Hollywood Reporter said.

“I didn’t want to get hit over the head from behind. We thought Trump Derangement Syndrome was a joke, but I’m pretty sure it’s real,” the artist said. “If no one peels these off, they could last there for 10 years.”

A member of the cleaning service that deals with daily graffiti and vandalism on the Walk of Fame told the Hollywood Reporter, “We started at 5 o’clock in the morning and we’ve found about 50 stars.” A street vendor added, “I was surprised, it looked pretty real.”

No star has ever been removed from the Hollywood Walk of Fame, including those of celebrities who have been accused or convicted of sex crimes such as Kevin Spacey and Bill Cosby.