The West Hollywood City Council on Aug. 6 unanimously passed a resolution calling for the removal of President Donald Trump’s star from the Hollywood Walk of Fame. 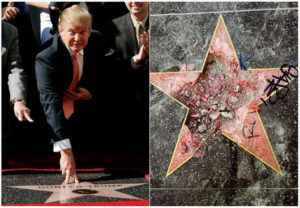 Radio host Dana Loesch tweeted: “And Kevin Spacey’s? Scotland Yard has six active investigations open for him now. And Bill Cosby? Convicted of sexual assault. Their stars are nearby.”

When prior inquiries were made about the removal of Cosby’s star, the Hollywood Chamber of Commerce said the Walk of Fame is a historical landmark and no star would ever be removed.

“Once a star has been added to the walk, it is considered a part of the historic fabric of the Hollywood Walk of Fame,” said Leron Gubler, then the chamber’s president and CEO. “Because of this, we have never removed a star from the walk.”

Duran also said that some constituent comments made during the Aug. 6 meeting were what he expected of Trump supporters.

“Unfortunately some of the comments made by the Trump supporters tonight are a reflection of that anger and angst and divisiveness. If anyone ever needed to solidify my vote on this, the Trump supporters who showed up tonight … pretty much solidified that what we’re doing is right.”

The Trump star has been vandalized numerous times and destroyed twice.