After 12 Republicans voted to strike down his border national emergency declaration, President Donald Trump said at a press conference that America’s immigration laws are “stupid,” “ridiculous” and must be changed. 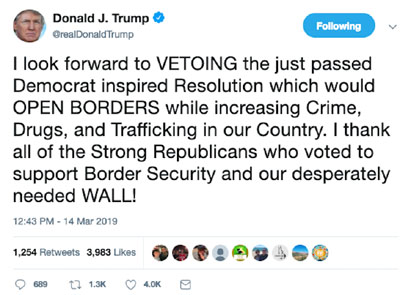 The Senate on March 14 voted to block Trump’s national emergency. The president said he would veto the Senate’s move.

The Republicans who voted with all of the Senate’s Democrats are: Mitt Romney and Mike Lee of Utah, Marco Rubio of Florida, Roy Blunt of Missouri, Lamar Alexander of Tennessee, Pat Toomey of Pennsylvania, Rob Portman of Ohio, Jerry Moran of Kansas, Susan Collins of Maine, Lisa Murkowski of Alaska, Rand Paul of Kentucky, and Roger Wicker of Mississippi.

Sen. Thom Tillis of North Carolina changed his mind minutes before the vote and said he would oppose it.

“Too true,” wrote Washington Times columnist Cheryl K. Chumley. “America is one large welcome mat for all the downtrodden of the world – and truly, that’s a good thing, so long as laws are abided and justice observed.”

Chumley continued: “And in the conservative mind: Border laws are just because they ensure the good of the country, the good of America’s citizenry, is the priority. Democrats, the left, the new socialists of the party – even some in the Republican Party, it seems – just can’t get that.”