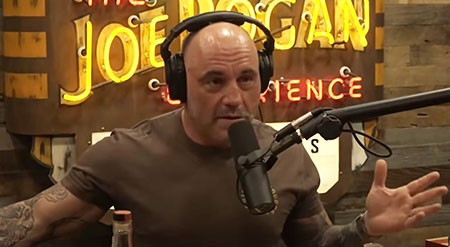 “Joe Rogan is an interesting and popular guy, but he’s got to stop apologizing to the Fake News and Radical Left maniacs and lunatics,” Trump said in a statement. “How many ways can you say you’re sorry? Joe, just go about what you do so well and don’t let them make you look weak and frightened.”

Rogan issued an apology after a video compilation (which lacked context) surfaced of him using the N-word multiple times on his podcast.

“It’s not my word to use. I’m well aware of that now, but for years I used it in that manner,” Rogan said. “I never used it to be racist, because I’m not racist. But whenever you’re in a situation where you have to say, ‘I’m not racist,’ you f—-d up. And I clearly have f—-d up.”

Spotify announced it would be adding a “content advisory” warning to all episodes that discuss topics like the coronavirus after ancient rocker Neil Young started a crusade to cancel Joe Rogan.

Rogan said: “One of things Spotify wants to do, that I agree with, is that at the beginning of these controversial podcasts — specifically the ones about Covid — is to put a disclaimer and say that you should speak with your physician and that these people and the opinions that they express are contrary to the opinions of the consensus of experts, which I think is very important. Sure. Have that on there. I’m very happy with that.”

Spotify CEO Daniel Ek said he would not pull Rogan’s podcast from the platform.

“I want to make one point very clear — I do not believe that silencing Joe is the answer,” Ek wrote in an open letter to his employees. “We should have clear lines around content and take action when they are crossed, but canceling voices is a slippery slope.”

In response to Ek’s decision not to cancel Rogan, Young is encouraging Spotify employees to quit.

“To the workers at SPOTIFY, I say Daniel Ek is your big problem — not Joe Rogan,” said Young. “Ek pulls the strings. Get out of that place before it eats up your soul. The only goals stated by Ek are about numbers — not art, not creativity.”

“Notice that Ek never mentions the Medical Professionals who started this conversation,” added Young. “Look, one last time – at the statements Ek has made.”

Young was referring to the 270 doctors, professors, and physicians who signed an open letter demanding that Spotify boot Joe Rogan.

Trump says Joe Rogan should ‘stop apologizing to maniacs and lunatics’ added by Editor Two on February 9, 2022
View all posts by Editor Two →