Trump on ‘dangerous journey’: ‘This is not just a campaign, it is a quest to save our country’

“America’s comeback starts right now,” said former President Donald J Trump on Nov. 15, 2022 at Mar-a-Lago in a serious address announcing that he was running for president in 2024. 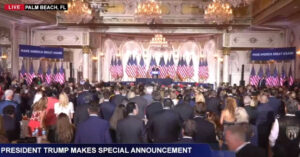 “In order to make America great and glorious again, I tonight am announcing my candidacy for president of the United States,” Trump said.

Emphasizing that the path forward would be no walk in the park for him and his family, he singled out his wife Melania (“It has not been easy”) and his son Eric who he said had been “unfairly” harassed, “the most subpoenaed man” in American history.

Among other highlights, Trump:

it is a quest to save our country’, Trump on ‘dangerous journey’: ‘This is not just a campaign, WorldTribune.com

Trump on ‘dangerous journey’: ‘This is not just a campaign, it is a quest to save our country’ added by Editor One on November 16, 2022
View all posts by Editor One →