Trump in Wyoming takes aim at ‘sick people’ in DC, ‘greatest danger’ to the USA

The “greatest danger” to the United States is the “sick people” running the show in the Washington, D.C. Swamp, former President Donald Trump said at a rally in Casper, Wyoming on Saturday. 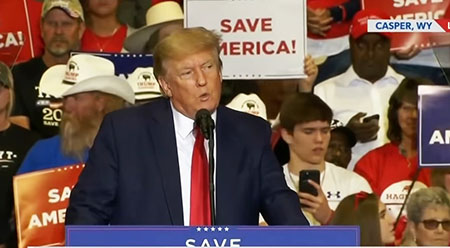 “The contrast between the Trump administration’s success and Joe Biden’s breathtaking failure could not be more stark,” Trump said. “Compare how great America was just two years ago. Think of it compared with today. Two years ago, look, where we were doing things that nobody thought possible. And then three years ago, it was even beyond, and then we got hit with the crap that came out of China, the China virus.”

“Over the next six months, the people of Wyoming are going to vote to dump your RINO congresswoman Liz Cheney. And you’re going to send the incredible Harriet Hageman to Congress, and together we are going to end crazy Nancy Pelosi’s political career once and for all. Crazy Nancy; she’s crazy.”

Cheney, Trump said, is “the face of the Washington swamp and the same failed foreign policy of the Clintons, Bushes, the Obamas, Bidens, and the entire sick political establishment.”

On Friday, Trump spoke at the National Rifle Association convention and touted the work his administration did to preserve the Second Amendment.

“The existence of evil is one of the very best reasons to arm law-abiding citizens and that is why one of the core missions of the NRA is to train, prepare and equip responsible American men and women with the knowledge and tools they need to defend themselves,” Trump said.

“The NRA has 125,000 certified instructors,” he added. “These are highly trained, very, very capable people. They train an incredible one million Americans to be safer gun owners ready to act when the situation calls… incredible job.”

Trump said his administration worked to stop the siege on the Second Amendment and told those in attendance at the convention that “those on the Left” will soon come for guns of all types.

“Let’s not pretend that those on the Left are not just talking about limiting one class of gun or one category of ammunition,” Trump said. “They’re not doing that. We all know they want total gun confiscation, we know that this would be a first step. Once they get the first step, they’ll take the second step, the third, the fourth, and then you’ll have a whole different look at the Second Amendment, which is, by the way, totally under siege. But we stopped it for four years. We stopped it.”

Trump also told the NRA members that “schools should be the single-hardest target in our country” and noted the need to mend issues surrounding “broken families” and mental health. He also suggested that some teachers should be able to “conceal carry.”

Speaking at the convention on Friday, NRA CEO Wayne LaPierre pushed back against calls for legislative gun control measures after the shooting in Uvalde.

“If we as a nation were capable of legislating evil out of the hearts and minds of criminals who commit these heinous acts, we would have done it a long time ago,” LaPierre said.

Trump in Wyoming takes aim at ‘sick people’ in DC, ‘greatest danger’ to the USA added by Editor Two on May 29, 2022
View all posts by Editor Two →