Trump challenges anyone to a public debate on 2020 election facts: ‘Ratings bonanza’

Big Media covers — and covers for — Democrats. Big Media’s ratings are in the toilet. 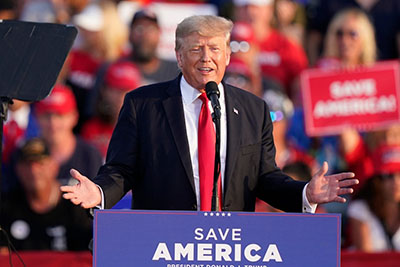 If Big Media really wants a “ratings bonanza,” former President Donald Trump said he is ready to make that happen by debating anyone on the “stolen” 2020 election.

“The Fake News Media cannot stand the fact that so many people in our Country know the truth, that the 2020 Election was rigged and stolen, yet almost every article written contains the words the ‘Big Lie’ or ‘unsubstantiated facts,’ etc., always trying to demean the real results,” Trump said in a Nov. 28 statement.

“I am willing to challenge the heads of the various papers or even far left politicians, who have perpetuated the Real Big Lie, which is voter irregularities and fraud on a massive and determinative scale.”

“This includes members of the highly partisan Unselect Committee of Democrats who refuse to delve into what caused the January 6th protest — it was the Fake Election results!”

Trump continued: “While I am willing to do it, they will never agree because they cannot argue that facts in states including Wisconsin, Pennsylvania, Michigan, Georgia, Arizona, Nevada, New Hampshire, and others such as New Mexico, where the Democrat Secretary of State changed the voting laws without legislative approval just prior to the Election, making it virtually impossible for the Republican presidential candidate to win.

“If anyone would like a public debate on the facts, not the fiction, please let me know. It will be a ratings bonanza for television!”

Trump challenges anyone to a public debate on 2020 election facts: ‘Ratings bonanza’ added by Editor Two on November 29, 2021
View all posts by Editor Two →