During a rally held just days after he was subpoenaed by the Jan. 6 Select Committee, former President Donald Trump issued his strongest signal yet that he will run again in 2024. 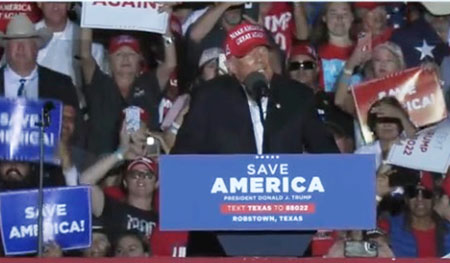 Speaking to a massive crowd at a Save America rally in Robstown, Texas, Trump said he would “probably have to do it again!”

Trump said: “The election was rigged and stolen and now our country is being destroyed. I ran twice, I won twice, I did much better the second time than I did the first, getting millions more votes in 2020 than we got in 2016, and likewise getting more votes than any sitting president in the history of our country by far!”

Trump’s use of the word “probably” was a new line. He routinely says at the rallies that he “may just have” to run again in 2024.

Trump then added: “But first, we have to win a historic victory for the Republican Party this November!”

(Trump’s full speech can be seen on Rumble here.)

Also during the rally, in which attendees broke out into a spontaneous and roaring rendition of the National Anthem, Trump announced he will be suing the Pulitzer organization in the next two weeks to retract the Pulitzer Prizes given to The Washington Post and The New York Times for false reports on Russian collusion.