The U.S. federal government is expected to take in $1.7 trillion in taxes from individuals in 2018, according to the Congressional Budget Office (CBO).

Individual income taxes will account for about half of all federal revenues for Fiscal Year 2018, which ended on Sept. 30, the CBO said. 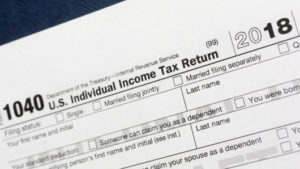 And, if the recent past is any indication, most of those taxes will be paid by the top 50 percent of taxpayers.

According to IRS data, the top 50 percent of all taxpayers in 2016 paid 97 percent of total individual income taxes.

“In other words, the bottom 50 percent paid 3 percent. Which small percentile of taxpayers also paid 3 percent or more? You might have guessed it. It is the top 0.001 percent, or about 1,400 taxpayers. That group alone paid 3.25 percent of all income taxes. In 2001, the bottom 50 percent paid nearly 5 percent whereas the top 0.001 percent of filers paid 2.3 percent of income taxes,” Bloomberg noted in an Oct. 14 report.

“The average tax rates paid for the very wealthiest has fallen in recent years from a peak of 24.1 percent in 2013 to 22.9 on 2016 and was a full four percentage points below the 26.9 percent that the top one percent paid on average,” Bloomberg’s report said. “To put these numbers in perspective, the top 0.001 percent of taxpayers consists of 1,409 returns, the top 1 percent equals 1.4 million returns and the top 50 percent is half of the total 140.9 million returns.”

Individual taxpayers may begin to feel the effects of President Donald Trump’s tax overhaul when they file their returns in 2019, Bloomberg said.