Lost in the political fracas in the aftermath of the Supreme Court decision, but emeshed in the still expanding bureaucratic jungle — and cost — of Obamacare is a fundamental issue: it is another failed attempt at “a comprehensive solution” to complex problems.

It‘s not a new phenomenon. Since the French Revolution, the Left has sought over-arching solutions to any political Gordian Knot. In that game of dividing the world into two kinds of people, “us” and “them”, no division works better than those who believe in “comprehensive solutions” and those who see incrementalism as progress. 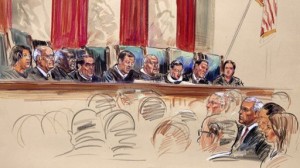 Unfortunately constitutional scholar President Barack Obama falls into the former category. It is why, for example, he often used to call the U.S. Constitution flawed. That it was, of course, goes without saying. It was why the Republic’s Founding Fathers immediately negotiated the first ten amendments in ratification, changes many of us consider paramount. Of course, the slavery compromise was a blot that haunts us into the 21st century despite great sacrifices made for progress in better race relations. But the careful cultivation of its essence with only incremental changes has been its genius.

To have believed, as the administration’s leadership, all health care problems could be solved with one fell swoop was ridiculous. Whatever else she may be remembered for, Speaker Nancy Pelosi will go down in history as sage for her analysis: we won’t know what is in the legislation until it has been adopted. But like this writer, I dare say most Congressmen still have not ruffled its 2,700 pages much less scrutinized an endless excretion of “regs” to implement it now emanating from newly hired bureaucrats. “Unintended consequences” has taken on new meaning.

Since health care constitutes one-sixth of the economy, it not only dictates our lives — lifespan being common even to the aging capitol politicians with their own special health care arrangements. But it also provides livelihood for many with its $2.6 trillion expenditure.

Instinctively Americans have reacted against the law. And I suspect that has less to do with the so-called mandate than conventional wisdom holds. In fact, polls say the young — most affected by penalty or tax — appear, given the continuing paucity of available jobs, remarkably loyal to a president they supported so fervently in 2008, Obamacare or no. What the majority public opinion reflects is the common sense American right-of-center hesitation to accept “a pig in a poke” as it used to be called.

But like the snapping of a rubber band, the cry has gone up — from the ever ready Bill O’Reilly, for example — presidential candidate Mitt Romney should offer an alternative to Obamacare. That is just what he must not do. No more comprehensive solutions!

What is required is tossing out Obamacare followed by pursuit of individual, studied repairs — including experiments at state level — to various aspects of the overall, continuing and growing problem.

Some already have been started by those closest to reality. Obviously tidy little monopolistic arrangements among the insurers must be smashed — opening state boundaries to all insurance providers. Are you listening AARP?

Insurance companies themselves seem not too unhappy with the much trumpeted proviso for “children” permitted to stay on parental policies until age 26. [Although there are those among us who say, “Whaaat?”] The reason is obvious: the young with less illness do not upset the actuarial tables.

The cost of emergency rooms as clinics for the uninsured has been exaggerated. Yes, no doubt they add to the overall unpaid bill for uninsured, but there are more important reasons for growing hospital costs.

Catastrophic liability will be increasingly difficult with the ever new technologies. Some states have found pooling insurance of preexisting conditions that possible solution. Having reached an age –“overreached” according to Mr. Rahm Emanuel’s brother, a self-appointed health expert involved in Obamacare’s plans for death panels — I believe I understand the dilemma of expensive testing.

But so-called defensive medicine costs, that is, doctors protecting themselves against malpractice liability and rising malpractice insurance, could be immediately reduced through tort reform. Why shouldn’t costs for nuisance suits and ambulance chasing fall on those who lose such litigation, especially with cases often settled out of court? Are you listening John Edwards? It might be a way to redeem yourself since your earnings proved you know more than most about this whole field of legal endeavor.

To hell with comprehensive solutions in general and Obamacare in particular added by Editor One on July 9, 2012
View all posts by Editor One →