There IS a God: Rush Limbaugh’s talent on loan extended for eternity 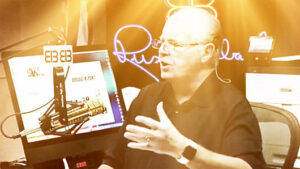 HEAVEN — According to sources, . . . Rush Limbaugh’s show has been renewed for an infinite number of seasons.  ….

“Greetings thrill-seekers, music lovers, conversationalists all across the fruited plain!” Limbaugh began in his first-ever celestial broadcast. “This is Heaven’s anchorman, the Doctor of Democracy, your own lovable little fuzzball, the all-knowing, all-seeing, all-caring, all-FEELING Maha Rushie, having more fun than a human being should be allowed to have, with talent on loan from GOD, and with half my brain tied behind my back, JUST to make it fair.”

All of Heaven cheered upon hearing the famous voice. …

After some negotiations, the Almighty has agreed to extend His loan of Limbaugh’s talent so he can continue broadcasting and commenting on heavenly matters. … Thanks to Rush’s new heavenly vantage point, his opinions are now documented to be right 100% of the time.

In addition to being played in Heaven, Rush’s new show will be played for the souls in Leftist Hell for all eternity — or at least until they all become Conservatives.

There IS a God: Rush Limbaugh’s talent on loan extended for eternity