Nothing says white supremacist like a cartoon blonde guy in a cowboy hat with a husk of corn in his pocket, holding a football in one hand while giving the OK signal with the other. 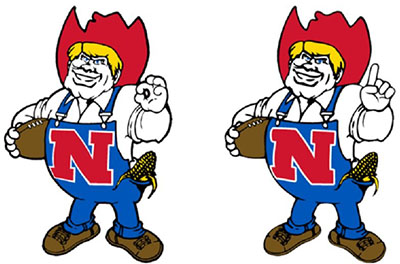 The woke mob, which in the past set its sights on, to name just a few, the Washington Redskins, Cleveland Indians, and Aunt Jemima, as symbols of hate which resulted in shameful caving and name and image changes, has now come for Herbie Husker.

The “OK” symbol means just that, all is good. It is also used to signify a successful 3-point shot in basketball and in what is called the “circle game,” where a person makes the symbol and tricks someone into looking at it so they can be punched.

But leftists convinced themselves it was a symbol of hate, alleging that the alt-right promoted it as a symbol of white supremacy on 4chan. Oh, and President Donald Trump used it often at rallies. That, in and of itself, was enough to set off the woke mob.

Herbie Husker, who made his first appearance as University of Nebraska mascot in 1974, was giving the OK sign long before 4chan existed. But that doesn’t matter to the Left. The mob has made its determination and that determination is that Herbie’s OK sign was a sign of white supremacy.

So the woke mob demanded Nebraska change the image. And Nebraska, as had so many cowardly teams, institutions, and brands before them, caved to the mob.

Now, Herbie Husker is making the “number one” hand gesture.

“That hand gesture could, in some circles, represent something that does not represent what Nebraska athletics is about,” Lonna Henrichs, the university athletic department’s licensing and branding director, told the Flatwater Free Press. “We just didn’t even want to be associated with portraying anything that somebody might think, you know, that it means white power.”

Henrichs added, “we made that change as quick as we could.”

The Flatwater Free Press report added: “Lawrence Chatters, the athletic department’s first senior staff-level head of diversity, equity and inclusion, was hired after the decision was made. He’s proud of the decision. He said he wants the Huskers to be ‘competitively inclusive.’ ”

Big Media and woke leftist activists have hyperventilated over the OK sign “time and time again, to the point of smearing Washington, D.C., firefighters and West Point cadets as white supremacists, when in fact few people outside the narrow Twitter fever-swamps in which journalists live are probably even aware of the gesture’s supposed ‘white power’ meaning,” Zachary Faria noted in a July 2020 op-ed for the Washington Examiner.

“The symbol has been and still is used by figures ranging from former President Barack Obama to Massachusetts Sen. Elizabeth Warren to Pope Francis. Alexandria Ocasio-Cortez recently flashed a double “OK” symbol, because she’s actually twice as much of a white supremacist as everyone else,” Faria wrote, adding, “No, the ‘OK’ hand sign is not a white power symbol. Neither is the circle game, nor are NBA 3-pointers. And neither is drinking milk, nor using a fidget spinner, for that matter.”