The U.S. government is currently seeking the forfeiture of some $14 billion in illicit profits from “El Chapo” (drug lord Joaquin Archivaldo Guzman Lorea).

That should cover the cost of the promised “great, great wall” that Donald Trump made the centerpiece of his successful campaign for the U.S. presidency. 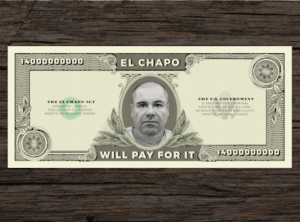 “Fourteen billion dollars will go a long way toward building a wall that will keep Americans safe and hinder the illegal flow of drugs, weapons, and individuals across our southern border,” Sen. Ted Cruz, Texas Republican, said.

The bill would reserve “any amounts forfeited to the U.S. Government as a result of the criminal prosecution of ‘El Chapo’ and other drug lords for border security assets and the completion of the wall along the U.S.-Mexico border,” Cruz said in a press release.

“El Chapo”, the former Sinaloa drug cartel kingpin, was recently extradited to the U.S. and indicted for several drug-related cases, including conspiracy to commit murder and money laundering.

The indictment alleges that between January 1989 and December 2014, the drug lord led a continuing criminal enterprise responsible for importing into the United States and distributing massive amounts of drugs and conspiring to murder anyone who posed a threat to his narcotics enterprise.

“By leveraging any criminally forfeited assets of El Chapo and his ilk, we can offset the wall’s cost and make meaningful progress toward achieving President Trump’s stated border security objectives,” Cruz said.