There is a “stunning disconnect” between Big Media’s “fictional version” of the Freedom Convoy and the real event that is ongoing across Canada, an analysis noted.

“In the media, it is the worst of protests. For most Canadians it is, by far, the best phenomenon ever to sweep our country,” Celeste
McGovern wrote for LifeSiteNews on Feb. 4. 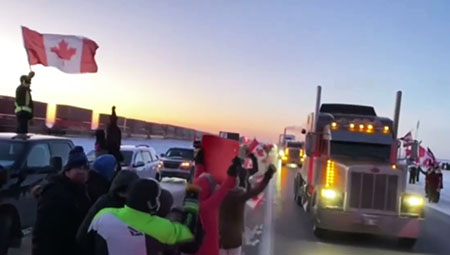 McGovern listed the top lies Big Media is reporting that differ greatly from the on-the-ground reality.

Media Lie No. 1: The crowds thronging to support the truckers are Canada’s “most aggressive citizens,” hate-spewing white misogynists and racists The media are raging against the people taking part in the trucker Freedom Convoy, describing them as a “horde of Bubbas” and Canada’s “most aggressive citizens.” Prime example: Washington Post op-ed author David Moscrov called the protest a display of “toxic authoritarianist politics.”

McGovern noted that “the tolerant Left in media and politics won’t tell you that the convoy is led by a grandmother with Métis heritage. They don’t show you the faces of the beautiful Maritime children on the highway who made ham sandwiches for the truckers. Or the Quebecois girls who sent their messages to them. They don’t show you 76-year-old Judy from Ontario who spent the day baking 10 dozen muffins for the heroes driving for the freedom she knew as a child, that her muzzled grandchildren have lost.”

“The convoy spirit is not just in Ottawa, however; it’s across the whole land and it’s infectious. The owner of a trucking company describes the reports from his truckers in the convoy who are moved to tears by the generosity and support of Canadians across the land giving free food, hotel rooms on the house, half-price fuel, welcoming the truckers with smiles and open doors and arms.”

Media Lie No. 2: It’s a “small fringe minority.” This phrase “has become an international joke,” McGovern wrote. Prime Minister Justin Trudeau first used it to describe one of the largest nonviolent protests in history and then the phrase was echoed by tax-funded media.

The government-subsidized CBC has consistently downsized the convoys and the gathering, reporting that on Saturday, Jan. 29, a mere 8,000 people were in Ottawa.

“The size of the crowd that converged in Ottawa in the sub-zero temperatures on the weekend was, as the video shows, easily in the hundreds of thousands,” McGovern noted. “It also does not include the hundreds of thousands of Canadians who stood on bridges, spilled out alongside the highways across the country, or escorted the truckers part of the way.”

The media’s blatant lie about the world’s largest convoy and Canada’s largest-ever protest elicited laughter across the globe. “It would appear that the so-called ‘fringe minority’ is actually the government,” Elon Musk tweeted.

Media Lie No. 3: The Trucker Convoy is led by white supremacist males. “Even if the people are gullible, the leaders of this trucking chaos are criminal, according to the media. None of the media have shown the courage to feature the woman who sparked the convoy, its crowdfunding organizer, Saskatchewan-born Tamara Lich, a calm, Métis-blood mother and grandmother,” McGovern wrote.

“We are here out of love for our families, our communities, and our nation,” Lich told reporters Thursday. “These past two years of COVID-19 mandates have divided us. Our movement has grown in Canada and across the world because common people are tired of the mandates and restrictions in their lives that now seem to be doing more harm than good.”

McGovern noted: “Not a word of racism, or misogyny there. Just unity and a demand for the right to be free of the most draconian COVID restrictions in the world.”

Media Lie No. 4: The Freedom Convoy is all anti-vaxxers. “An inconvenient fact for the media is that many in the throng they hate are vaccinated,” McGovern noted. “The media apply the slur ‘anti-vaxxer,’ to wave away anyone, including doctors and scientists, who question any government or public health demand in the endless ’emergency.’ ”

Matt Starr, a Canadian father with a heart condition, said that his cardiologist and GP endorsed his medical exemption from the shots, which are now known to have caused thousands of cases of serious heart inflammation, myocarditis and pericarditis. Does that make him an “anti-vaxxer”?

Media Lie No. 5: The Freedom Convoy put the city in disarray and disrupted the lives of locals. Big Media is echoing the views of Doug Ford, premier of Ontario, “the man who has led the most harmful and least effective business-bankrupting, mental-health damaging, life-disrupting COVID lockdowns in the world,” McGovern wrote.

“People have to move on,” Ford said in complaining that the Freedom Convoy was shutting down the capital city. “Let the people of Ottawa live, let the businesses open up.”

McGovern noted: “Yep. That’s what this is about. All the inconvenience ends when you let the people of Canada live, when you let their businesses open up. The inconvenient truth for media: The government has closed the businesses in Ottawa, not the truckers. The government is refusing to recognize Charter Rights and Freedoms of its citizens, not the truckers.”

McGovern concluded: “It hardly needs comment, but if anyone is colluding in lies it is our media, our politicians and the other elitists who profit from the COVID ordeal never ending.”

🇨🇦 @MattBrevner and I had no luck finding a white supremacist at Vancouver’s Freedom Convoy today.
Check out our cross Canada convoy coverage at https://t.co/ncTEWCCvEY pic.twitter.com/FDlzdRuF3f