She’s only been dead for 19 months but for whatever reason no deceased figure since 1968 has been as rapidly transformed into a patron saint of American modernity by the ruling progressive establishment quite like Supreme Court Justice Ruth Bader Ginsburg.

The persistence of the operation is interesting to observe, even if the subject itself is not. Plenty of critics in the ranks of the dominant big-box media took pokes at the pop-star deification of Ginsburg in the latter years of her life. Most shared a predictably common theme: she wasn’t ideologically perfect enough on issues of the day to merit such treatment. This effectively underlined the essence of the RBG phenomenon: its utterly contemporary nature. 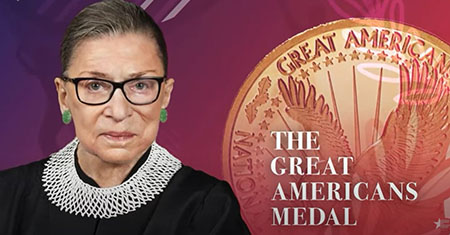 Ginsburg’s PR usefulness should have waned significantly a couple of weeks after her death, for she could no longer be portrayed as the hipster octogenarian sitting jurist inspiring “Resistance” to the dragon Donald Trump by the drivers of a thoroughly manipulated 24/7 news cycle.

But rather than see their buzzworthy viral-meme propaganda effort recede like a political Pet Rock fad, progressives are determined to establish full permanent icon status upon Ginsburg in a way not seen since the peak of Robert F. Kennedy’s popularity more than 50 years ago.

The question is not why they do these things. Canned propaganda is a trademark weapon of the political and cultural Left. The real mystery is: Why Ginsburg?

On March 31, the U.S. Navy announced that a ship would be named after her. NBC News dutifully reported:

The future John Lewis-class replenishment oiler — a ship that transfers fuel to the Navy’s operating carrier strike groups — will be the eighth such vessel to be named for an historic figure who fought for civil and human rights.

That’s not all too surprising. Political correctness has turned the naming of naval ships into an insipid exercise in wokeness on a par with the naming of new dormitories on cultural Marxist college campuses.

But the effort to turn Ginsburg into a George Washington or Robert E. Lee of the juridical Left goes well beyond that. The Smithsonian, once a respected and even revered museum of the American spirit, is stoking the RBG imagery as if she were its Charles Lindbergh for the 21st century.

The use of the incredibly silly word “artifacts” attempts to remodel a woman who died less than two years ago into a historical icon who already transcends the centuries. The article itself is no less ludicrous:

She was an associate justice of the U.S. Supreme Court who, at least for the last decade of her life, did not need an introduction. The diminutive — 5’ 1” — Ruth Bader Ginsburg was regaled with standing ovations wherever she went, often to her bewilderment. But she was much more than just the “Notorious RBG.” The fullness of her achievements is being recognized by the Smithsonian’s National Museum of American History, which has posthumously given her its Great Americans Award.

What makes the museum’s labors on behalf of Ginsburg noteworthy is the fact that they appear to exceed those accorded to other “Great Americans Award” winners, who were obviously chosen (with the exception of one athlete) in order to capitalize on roiling issues of the moment or to serve as a Lifetime Service Award for aged servants of the ruling establishment cause.

Thus Dr. Anthony Fauci, chief federal embodiment of the coronavirus social regime, was given the award in 2021:

The infectious diseases physician and researcher is the seventh individual to receive the Great Americans Medal, which was first given in 2016. Previous recipients have included Madeleine K. Albright, Colin L. Powell, Tom Brokaw, Cal Ripken Jr., Billie Jean King and Paul Simon. The medal — a gold piece inspired by Augustus Saint-Gaudens’ 1903 Double Eagle $20 coin — is awarded for “lifetime contributions embodying American ideas and ideals, and honors individuals who have not only made a lasting impact in their fields, but whose philanthropic and humanitarian endeavors set them apart.”

Much like the Navy and its thoroughly limp ship names, the shelf life on Albright, Fauci, Powell, Brokaw, King and Simon is quite limited, to say the least. Good luck trying to explain that to Nancy Pelosi, however.

Yet this is not the plan with Ginsburg. She is to be lionized and cast in monumental stone. Again, the wording is ridiculous:

During a recent ceremony, her daughter Jane, a professor at Columbia University Law School, and her son James, founder of a classical music record label in Chicago, reminisced about their mother. They also gave contextual back stories for a trove of objects from Ginsburg’s chambers, including a stack of printed briefs from her own arguments before the court and a nameplate for her library cart, that the family has donated to the museum.

Printouts of Ginsburg arguments from a few years ago are now treasured historical curios, according to the Smithsonian.

It gets even more bizarre. As in, very, very weird:

Among the items that the Ginsburg family donated were her specially tailored judicial robe from Maison Bosc in Paris and four of the many collars she wore with the gown. Ginsburg and fellow Justice Sandra Day O’Connor — the first woman on the Court — began wearing the collars to feminize the traditionally masculine garment. People occasionally would give Ginsburg collars, but the donations started pouring in after 2013, the year that then-law student Shana Knizhnik started the Notorious R.B.G. blog, recalls Jane Ginsburg.

The Smithsonian received one of her most-widely recognized collars, the “dissent” collar. It was simply a repurposed rhinestone and faux crystal necklace from the retailer Banana Republic that she received in a swag bag at the Glamour Women of the Year Awards in 2012. James Ginsburg described it as a “dour” collar to match his mother’s mood when she had to give a dissenting opinion. The “majority” collar was brighter. Her law clerks purchased the necklace—sunflower-like with its bright yellow beadwork and pendulous small crystal balls—from Anthropologie.

America’s cultural wealth is in good hands. George Washington’s military uniform will now be joined by a swag-bag Banana Republic collar once worn by the revered RBG.

This shallowness should be seen for what it really is: a spray-painted graffiti vandalizing of American history:

… a custom Lego set built by author Maia Weinstock… featured Lego figures of Ginsburg, and fellow female Justices Sandra Day O’Connor, Sonia Sotomayor and Elena Kagan. Weinstock gave the set to Ginsburg in 2015 and it, too, will now reside at the Smithsonian….

Ginsburg increasingly permeated pop culture in the mid-2000s. In 2019, MTV viewers bestowed the first-ever “Real-Life Hero” award on the justice. The red metal popcorn bucket — set on a pedestal and overflowing with gold-colored popcorn — was also donated. “You don’t get many justices that manage to get themselves an MTV Award,” says Graddy.

The construction of the “legacy” of Ruth Bader Ginsburg, then, in the end amounts to nothing more than another rock hurled into a window of America’s tottering cultural mansion. She is the history-class equivalent of renaming 660 geographic features because the word “squaw” is now deemed racist (and misogynistic).

The absurdity behind all this is a feature, not a bug. The American citizen’s mind is meant to rebel against that which it must quietly acquiesce to.

It’s the thousand paper cuts approach to destroying a nation. The Left knows it works while the Right endlessly wastes time and energy debating the logic of each individual cut.