Here we go again; Another military coup in Sudan.

The army takeover in one of Africa’s largest if most unstable countries, underscores the growing economic, social and political turmoil between a new civilian-led government and the restive military who’s been in and out of the shadows since the nominal return to democracy two years ago.

In August 2019, Sudan’s long serving dictator Omar Al-Bashir was toppled by the army. But in the wake of Bashir’s entrenched thirty-year authoritarian rule, civilian protests and a strong civic movement forced the military to enter into a transitional power sharing agreement leading in theory to a more democratic government for this land of 42 million people. 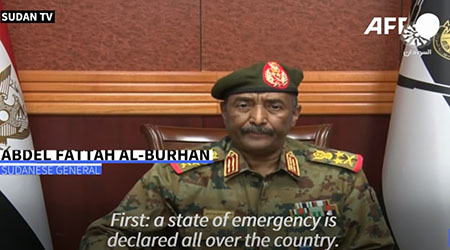 Literally on the eve of the overthrow, American Special Envoy Jeffrey Feldman visited the capital Khartoum to press for agreement between the military and the civilians; the envoy departed with what he thought was a deal.  Hours later the military overthrew the transitional government.  Washington was hoodwinked.  Surprise, Surprise.

The Sudan coup has triggered a lightning response and pushback by the international community.

UN Secretary General Antonio Guterres told reporters, “I once again strongly condemned the forceful military takeover of power in Sudan…. It is true that Sudan has achieved important milestones; they cannot be reversed.  A civilian-military partnership is critical.”

The UN Security Council later met in urgent session.  The African Union and the Arab League have condemned the power grab.  United Kingdom Ambassador Barbara Woodward stated, “Two years ago, the people of Sudan put their lives on the line for democracy.  They should not have to do so again.”

As importantly the United States immediately suspended $700 million in aid for Sudan and The World Bank put a few billion in loans on hold.

First a little backstory.  Omar al-Bashir ruled over Sudan for 30 years, turning this Horn of African state into an international pariah.  Remember Darfur?  The Arab regime’s terror against largely Christian nomads in the vast western Darfur region of the country became synonymous with ethnic cleansing.

While still in power, in 2008 Bashir was indicted by the International Criminal Court (ICC), but still has not been delivered to the Hague for justice even by the former transitional government.

This raises many unanswered questions.

According to the UN Commission of Inquiry on Darfur, an estimated 400,000 people were killed and almost 3 million people were forcibly displaced from their homes.  Systematic rape and violence against women was commonplace.  Al-Bashir’s indictment by the ICC for alleged crimes included genocide, war crimes and crimes against humanity during the Darfur crisis between 2003 and 2020.

A joint United Nations/African Union peacekeeping mission (UNAMID) was deployed to the restive region in 2007 until being phased out last year.

The Secretary General’s Special Representative for Sudan advised, “The United Nations reaffirms its unwavering commitment to support the realization of the legitimate aspirations of the Sudanese people for a peaceful and democratic transition in Sudan.” But that’s easier said than done.

The New York based Human Rights Foundation (HRF) stated categorically, “Sudan’s military, led by the same generals who oversaw the genocide in Darfur under Omar al-Bashir’s brutal rule, is dragging the country back into a full-blown dictatorship after almost two years of hope for democratization.”

Nonetheless, Sudan’s vast petroleum reserves served to prop up the regime.  Not surprisingly the People’s Republic of China became Sudan’s major trading partner and political ally despite the regime’s ostracism over the years.

But let’s not fool ourselves. Even prior to the military coup Sudan was ranked as Not Free by the human rights monitor Freedom House.  The Khartoum regime ranked poorly with a civil and political rights score of 17 out of 100. That’s still ironically higher than neighboring regional states as South Sudan, Eritrea and Somalia.

Pro-democracy protests have rocked Khartoum in a bid to reverse the coup.  There’s a chance that with financially-focused international pressures, the generals may back down. But as Secretary General Guterres stated forcefully, “Now, we are seeing a multiplication of coups d’etat.”  Sudan seemed a coup waiting to happen.

Sudan coup jolts country’s fragile comeback hours after U.S. envoy’s visit added by Editor One on November 5, 2021
View all posts by Editor One →