In a letter addressed to “The Citizens of the United States of America”, a Michigan state representative said she is “in receipt of evidence reflecting systemic election fraud in Michigan that occurred in the November 2020 election.”

Last week, the state Senate’s Oversight Committee chair, Ed McBroom, and state Senate Majority Leader Mike Shirkey, who have both admitted they would consider a forensic audit in their state if Arizona finds meaningful evidence of voter fraud in their forensic audit, released a report stating that they could find no evidence of “widespread or systemic fraud” in Michigan’s November election. 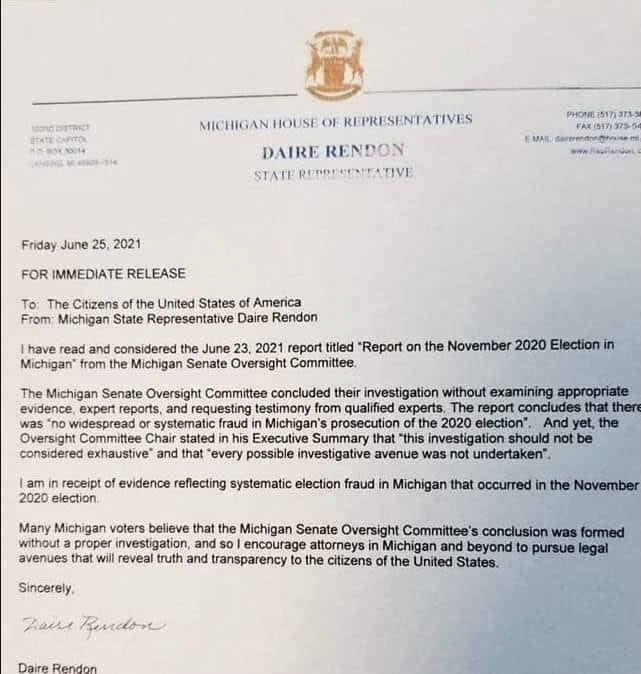 Critics say the Michigan state Senate’s report ignores alleged threats and intimidating behavior carried out by election workers and other leftist agitators against hundreds of GOP and Independent poll challengers during ballot counting.

The state Senate’s report does not mention Jessy Jacob, a City of Detroit employee who testified about the fraud she witnessed while working on the election as a paid employee.

Critics also said the state Senate’s report attempted to discredit Mellissa Carone, a Dominion contract worker who signed a sworn affidavit regarding the multiple ballots she said she witnessed being re-run through tabulators multiple times by paid election workers at the TCF Center in Detroit.

According to a June 29 report by 100 Percent Fed Up, Rendon said that “she became especially concerned about the integrity of the November election after she reviewed the Assessment of Halderman Expert Report dated March 26, 2021, by James Thomas Penrose IV and Jeffrey Lenberg.”

According to Rendon, the wireless modems could be connected by a “hot-spot” on a mobile phone. The report also identifies two foreign IP addresses that were found on the hard drive of the voting machine they examined. One of the IP addresses was from a learning center in Taipei, Taiwan, the other was from Nuremberg, Germany.

Daire told 100 Percent Fed UP that she would like to see her fellow lawmakers take this report and other similar, credible reports seriously.