Several Michigan residents have signed affidavits, which were sworn under penalty of perjury, alleging they witnessed widespread election tampering in Detroit involving many thousands of ballots.

City of Detroit employee Jessy Jacob stated in an affidavit that she was instructed to backdate thousands of absentee ballots on Nov. 4 to make them appear legal even though they were not in the Qualified Vote File (QVF) and had not arrived by the deadline. 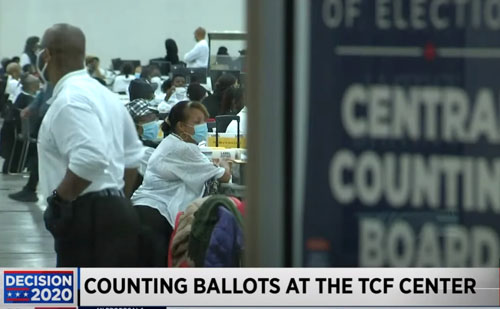 “On November 4, 2020, I was instructed to improperly pre-date the absentee ballots receive date that were not in the QVF as if they had been received on or before November 3, 2020,” Jacob testified. “I was told to alter the information in the QVF to falsely show that the absentee ballots had been received in time to be valid. I estimate that this was done to thousands of ballots.”

Jacob said in the affidavit that she was assigned to work Detroit’s election in September and for weeks witnessed systemic fraud and tampering with voters at multiple locations.

“I processed absentee ballot packages to be sent to voters while I worked at the election headquarters in September 2020 along with 70-80 other poll workers,” her affidavit stated. “I was instructed by my supervisor to adjust the mailing date of these absentee ballot packages to be dated earlier than they were actually sent. The supervisor was making announcements for all workers to engage in this practice.

Robert Cushman, another poll observer in Detroit, submitted an affidavit that described behavior similar to what Jacob said she witnessed.

Cushman said he saw large swaths of ballots being counted the day after the election for voters who were not in the authorized list of names. In some cases, he added, fake birth dates were being used to fill in birth dates.

“Every ballot was being fraudulently and manually entered into the Electronic Poll Book (QVF), as having been born on January 1, 1900,” Cushman continued. “This ‘last’ batch of ballots was processed in the 8:00 p.m. to 10:00 p.m. time frame. When I asked about this impossibility of each ballot having the same birthday occurring in 1900, I was told that was the instruction that came down from the Wayne County Clerk’s office.”

Alexandra Seely, a Michigan voter who worked as a Republican poll challenger, said in an affidavit that her challenges to suspect ballots were ignored and she was “harassed and threatened” for raising concerns.

“I challenged 10 votes at table 23, they would not take out the log to record my challenges,” Seely’s affidavit says. “I had to write names and ballot numbers on my own. I asked to make incident reports. They would not allow me, and said they will make a note in the computer. They did not and proceeded to keep counting.”

Patrick Colbeck, a poll watcher at the TCF Center in Detroit, said in an affidavit that he observed an active Internet connection on the screens of the computers used to tabulate and adjudicate ballots at the absentee-vote counting center.

“All it takes to confirm the connectivity status of a Windows computer is to roll the cursor over the LAN connection icon in the bottom right corner of the display,” Colbeck’s sworn affidavit states. “When there is no Internet connection, a unique icon showing a cross-hatched globe appears. I proceeded to review the terminal screens for the Tabulator and Adjudicator computers and I observed the icon that indicates Internet connection on each terminal. Other poll challengers can attest to this observation as required.”

According to the Michigan government website: “Voting machines cannot be connected to the Internet during ballot tabulation. Only after counting is finished and a paper record has been generated will some jurisdictions connect the machines to the Internet to send unofficial results to the county clerk.”

Colbeck, a former Michigan state senator, said that the area had wireless routers set up with networks called “CPSStaff” and “AV_Counter” broadcast in the area. He added that a security incident that occurred at 10 a.m. on Election Day may have been caused by the voting equipment being connected to the Internet.