Snubbing those who serve? Harris not saluting troops when boarding Air Force 2

The tradition of saluting the honor guard upon entering Air Force Two is not being followed by Kamala Harris, a report said. 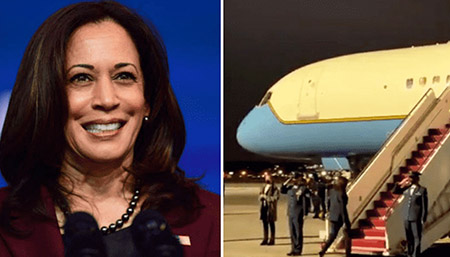 At least four video clips in recent days, compiled by Fox News, show Harris not returning the salutes given her by the Marine guards whether she is boarding or leaving the plane.

North Carolina Republican Rep. Madison Cawthorn tweeted: Biden is in no rush to get to the Southern border to see the disaster his policies have created. Kamala Harris does not salute back to the troops as she boards Air Force 2. If you look closely, you’ll see that the Biden Administration perfectly encapsulates “America Last.”

The tradition of saluting the Marines outside Air Force One began under President Ronald Reagan.

“I know all the rules about not saluting in civilian clothes and so forth, and when you should or shouldn’t,” Reagan said, according to the Florida Times-Union in the 1980s. “So, I said to the commandant, I said, ‘Look, I know all the rules about saluting in civilian clothes and all, but if I am the commander in chief, there ought to be a regulation that would permit me to return a salute.’ And I heard some words of wisdom. He said, ‘I think if you did, no one would say anything.’ ”

Washington Times reporter Victor Morton noted: “Harris is not part of the military chain of command — the president alone is commander-in-chief and the vice president has no formal role — meaning the military obligation to salute one’s superior does not exist. Nevertheless, vice presidents usually get saluted as a courtesy.”

DISGRACEFUL: @VP Kamala Harris refuses to salute the honor guard at the steps of the aircraft. It is a clear demonstration of her dislike for those in uniform, both law-enforcement and military. pic.twitter.com/7QFHzamnt7