Leftists have been calling on Twitter to suspend President Donald Trump’s account since the day he was sworn in.

Now Twitter is seen caving to the constant harping of major media and many Democrats for the social media platform to censor the president’s tweets. 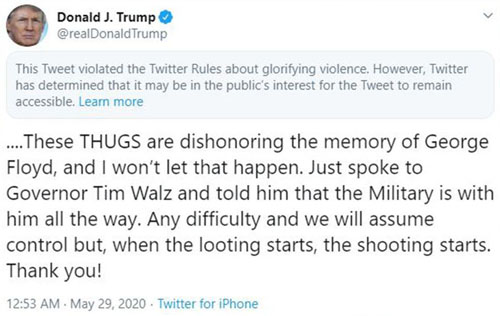 Twitter slapped a misinformation label Tuesday on one of the Trump’s tweets in which the president pointed out how vote-by-mail is vulnerable to fraud. On Friday, Twitter concealed the president’s tweet in which he referred to those who are rioting across the nation as “thugs.”

Facebook has thus far resisted efforts to censor Trump. And now the Left has its knives out for Facebook after CEO Mark Zuckerberg had the nerve to appear on Fox News on Thursday.

Sen. Elizabeth Warren lashed out against Zuckerberg for his interview with Dana Perino in which he tried to explain why it’s a bad idea to become “arbiters of truth” while fact-checking political content.

“We have a different policy than, I think, Twitter on this,” Zuckerberg told Perino on “The Daily Briefing”. “I just believe strongly that Facebook shouldn’t be the arbiter of truth of everything that people say online. Private companies probably shouldn’t be, especially these platform companies, shouldn’t be in the position of doing that.”

Warren tweeted in response to Zuckerberg’s comments: “This is eroding our democracy.”

Twitter CEO Jack Dorsey said: “We’ll continue to point out incorrect or disputed information about elections globally. And we will admit to and own any mistakes we make. This does not make us an ‘arbiter of truth’. Our intention is to connect the dots of conflicting statements and show the information in dispute so people can judge for themselves. More transparency from us is critical so folks can clearly see the why behind our actions.”

Zuckerberg said Facebook is forming an independent oversight board, wherein the company’s platform can impartially protect free speech and create an arbitration system. He said the board will be made up of a bipartisan group of conservative and liberal judges to help determine whether specific comments, posts or links comply with Facebook’s terms of service.

The independent oversight board named a slate of 20 members out of a projected full membership of 40 during its May 6 unveiling. Under this system, Facebook users who are unhappy with a moderator’s decision can file an appeal with the board, which will choose to take a handful of cases each year, similar to the Supreme Court.

The conservatives on the board applauded the idea.

“I think there is tremendous potential for doing good here. What struck me most about the people on this Board is that they are idealistic, incredibly capable, and forward-looking,” John Samples, an executive at the Cato Institute and one of the judges on the board, told the Daily Caller News Foundation on May 7.