PORNICHET, France — Visiting a bountiful farmers market on France’s western Brittany coast, you can’t help but be dazzled by the choice and abundance of fresh fruits and food. Even in small towns, the sheer choice and selection is daunting.

Now let’s metaphysically transport ourselves to Ukraine’s besieged Black Sea coast where for endless months, the bounty of wheat and grains have been blocked by the Russian occupiers from leaving ports and being shipped to the outside world. 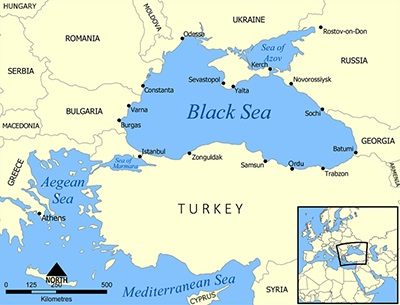 But now there’s finally been a breakthrough in opening the bottleneck and getting the blocked food to the outside world. At least hopefully.

In what he optimistically called a “beacon of hope” in a world that desperately needs it, UN Secretary General Antonio Guterres helped broker a complicated diplomatic deal between warring parties Russia and Ukraine.

Speaking in Istanbul, Turkey in that great city on the Bosporus, Guterres intoned, “Today there is a beacon on the Black Sea … a beacon of Hope, a beacon of possibility, a beacon of relief in a world that needs it more than ever.”

Guterres stressed, “The question has not been what is good for one side or the other … the focus has been what matters most for the people of our world.”

The deal was facilitated by Turkish President Recep Tayyip Erdogan whose country controls the narrow and strategic maritime chokepoints connecting the Black Sea to the Mediterranean. Naturally the accord is clearly in Turkey’s interest too as so much shipping transits Turkish waters. Brokering the grain accords improves Erdogan’s tarnished global image too.

But while the landmark accord helps Ukraine slowly regain its export markets, a parallel agreement between the UN and Russia allows for reopening markets for Russian grain and fertilizer. Predictably Russia was not willing to unilaterally help Ukraine without gaining something substantial in return.

Still the UN was wise to keep this stand-alone agreement out of the deadlocked Security Council where a plethora of competing political interests would have slowed or stopped any progress. Russia surmised this deal was better than possible U.S./NATO armed escorts for merchant ships.

Look at the numbers; Ukraine supplies 81 percent of wheat to Lebanon, 64 percent to Qatar, and approximately half of supplies to Tunisia, Libya and Pakistan.  Fully 80 percent of Egypt’s wheat imports comes from Ukraine and Russia.

Following the Istanbul accords, at least 22 million tonnes of wheat from the Ukraine’s breadbasket is due to be shipped to international markets. According to the African Development Bank, both Ukraine and Russia supply nearly 40 percent of Africa’ s wheat. Since the war, shortages have seen food prices spike forty percent.

Prior to the conflict Ukraine exported 7 million tonnes of grain per month; now the number has cascaded to 1.5 million.

Ukraine is among the world’s largest grain exporters supplying 45 million tons to global markets according to the UN’s Food and Agriculture Organization.  Since hostilities with Russia, much of the grain has been bottled up and backlogged in grain silos. While the food is already harvested, Moscow’s actions are blocking it from entering the open markets.

Following the agreement Ukraine’s President Volodymyr Zelensky stressed the UN was responsible for guaranteeing the accord; “We must trust the United Nations. Now it is their responsibility to guarantee the deal.”

The Black Sea Grain agreement allows for a complex process of registering cargoes and ships which will be allowed to leave three Ukrainian ports including Odessa.  The ports are mined by both belligerents and thus safe passage must transit through narrow channels.

Within hours of the humanitarian agreement, Russian missiles hit Odessa port sending a stark reminder that Moscow can still set the agenda. Ukraine’s Foreign Ministry called the Russian action a “spit in the face” to UN and Turkish efforts to reopen humanitarian corridors.

At the same time Russian Foreign Minister Sergei Lavrov visited Egypt in a bid to maintain close if strained ties to the Cairo government.  Moscow is courting a number of African “fence-sitting” governments who have not strongly condemned the Russian invasion.

So, shall this work?  As it appears that it’s in the mutual interest of both countries, there’s just the chance that humanitarian food corridors may operate.  The alternative remains wider instability in places far from Ukraine’s shores.

Siege of Ukraine supply of food to the world is broken; We hope, WorldTribune.com

Siege of Ukraine supply of food to the world is broken; We hope added by Editor One on July 29, 2022
View all posts by Editor One →