Only 26% of Hispanic voters approve of Joe Biden’s job performance, compared to 54% who disapprove, according to a Quinnipiac poll released on April 13. 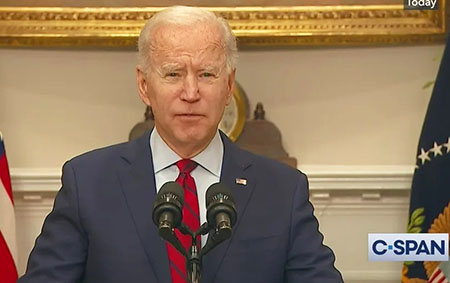 “Over the past year, polling has consistently shown a strong majority of Americans — and upwards of 70% of Hispanics — disapprove of Biden’s handling of immigration, including of the southern border,” Just the News noted in an April 17 report.

Other polling has found Hispanics deserting the Democrat Party.

The National Republican Congressional Committee’s Battleground Survey Project found that Republicans have made substantial gains among Hispanic voters since the 2020 election, narrowing the gap by almost 20 percentage points.

Other polling has shown Hispanics evenly split between Democrats and Republicans, a huge shift from what was once a lopsided balance in favor of Democrats.

Critics of Biden’s border policies told Just the News that Democrats think their words and actions on immigration will increase their support among Hispanics when in reality the opposite has occurred.

“The Biden administration’s tone-deaf pandering has completely backfired,” said Anna Paulina Luna, a Hispanic-American of Mexican descent who’s running for Congress in Florida’s 13th District. “Hispanics on border towns are especially frustrated with the irresponsible messaging of the current administration regarding illegal immigration and open borders.”

Don McLaughlin, the mayor of Uvalde, Texas, said he believes the situation at the border will cause many Democrats to vote for Republicans in November.

“I think you’re going see a lot of people that would normally go Democrat … vote red,” McLaughlin told the “Just the News, Not Noise” television program, noting Democrats don’t want to discuss the border at all.

Sheriff Mark Lamb of Pinal County, Arizona, which is located near the southern border, told the same television program that Hispanic immigrants who come to the U.S. are more frustrated with “open-border” policies than anyone and may support conservative candidates as a result.

“They are frustrated, too,” said Lamb. “The majority of people that come here to make a better life, who love freedom, who want the American way of life, those people believe in family values, they believe in conservative ideals … And I think you’re going see a shift of a lot of people, especially amongst the Latin communities, that will vote to defend the family, to defend freedom, to defend this country they’ve come to love and appreciate.”

Team Biden’s decision to end Title 42 “welcomes an influx of migrants to the U.S. that our system is not prepared to handle,” Florida Republican Rep. Maria Salazar told Just the News. “He has no plan to solve the issue at our southern border, and it’s hitting my community — the Hispanic American community — the hardest.”

“We Latinos don’t want open borders,” Salazar added. “We want safety for our families, order at the border, and a growing economy.”