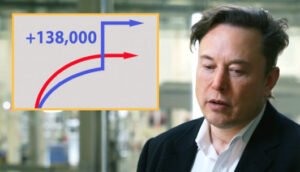 Elon Musk’s bid to purchase Twitter came up short after 138,000 board votes were found at 2 a.m., a company spokesman confirmed Tuesday. Musk had been in talks to purchase the company for $44 billion.

“We really thought Musk was going to pull this one out,” said Twitter CEO Parag Agrawal. “The yes votes had a strong lead when I went to bed last night, but that was before we counted all the mail-in votes that one of our employees found in locker 142 at the bus terminal.”

When the final votes were tallied, the takeover bid failed by a final tally of 10 votes for, 138,000 votes against. While the final result came as a shock to most observers, Agrawal said the election was fair. “Twitter takes election integrity very seriously,” he noted. …

Musk later tweeted that he was planning a demonstration at Twitter headquarters on May 6 to protest the results. His account was then permanently suspended by Twitter for questioning the integrity of the election.

Shock: Elon Musk takeover falls short after 2 a.m. discovery of mail-in ballots added by Editor One on April 26, 2022
View all posts by Editor One →