The NRA responded to the announcement of the deal by saying it “falls short at every level.” 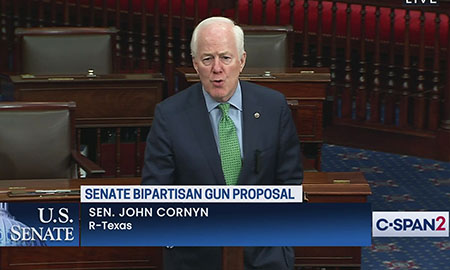 “This legislation can be abused to restrict lawful gun purchases, infringe upon the rights of law-abiding Americans, & use fed dollars to fund gun control measures being adopted by state & local politicians,” the NRA said. “This bill leaves too much discretion in the hands of government officials and also contains undefined and overboard provisions — inviting interference with our constitutional freedoms.”

Breitbart News Second Amendment columnist AWR Hawkins pointed out that “trafficked or straw purchased firearms were not used in Uvalde, Buffalo, Parkland, Las Vegas, or Orlando, among others.”

The straw purchase section of the Senate bill states: “It shall be unlawful for any person to knowingly purchase, or conspire to purchase, any firearm in or otherwise affecting interstate or foreign commerce for, on behalf of, or at the request or demand of any other person, knowing or having possible cause to believe that such other person” is prohibited from making the purchase for themselves.”

Hawkins noted that “straw purchases were banned long before” the Senate’s legislation was announced.

The trafficking section of the Senate gun-control bill “is much the same, in that it presents a penalty for selling guns to individuals who are otherwise barred from having them,” Hawkins noted.

The bill says that if a Federal Firearms License holder (FFL) contacts the National Instant Criminal Background Check System (NICS) for a background check on a person under the age of 21, “the criminal history repository or juvenile justice information system…of the state in which the person resides” is to be contacted.

Moreover, “the appropriate State custodian mental health adjudication records in the State in which the person resides” is to be contacted.

Also, “a local law enforcement agency of the jurisdiction in which the person resides” is to be contacted, for purposes of “determining whether the person has a possibly disqualifying juvenile record under subsection.”

While all these numerous points for data are being contacted, the new Senate gun control bill allows the FBI background check’s review period to be expanded from the current three business days to “no more than 10 business days, after the [FFL] contacts the system.”

The list of prohibited purchasers in the NICS will include certain boyfriends and girlfriends, should the Senate gun control deal become law.

The Senate legislation states: “The term ‘dating relationship’ means a relationship between individuals who have or have recently had a a continuing serious relationship or a romantic or intimate nature.”

The legislation does not indicate who will decide which relationships qualify as a “dating relationship.”

Delaware Democrat Sen. Chris Coons said the Senate deal does not include a federal red-flag law.

“The bill does not include a prescriptive federal red-flag gun law. That’s something we’re actually specifically not doing is saying here is a national red-flag law,” said Coons. “It in fact provides incentives for states to adopt red-flag laws with due process protections or to better implement so-called red-flag laws if they have them on the books.”

Along with Cornyn, 13 other Republican senators voted to advance the legislation. They are: Mitch McConnell of Kentucky, Richard Burr and Thom Tillis of North Carolina, Lindsey Graham of South Carolina, Susan Collins of Maines, Bill Cassidy of Louisiana, Roy Blunt of Missouri, Mitt Romney of Utah, Rob Portman of Ohio, Shelley Moore Capito of West Virignia, Joni Ernst of Iowa, Lisa Murkowski of Alaska, and Todd Young of Indiana.