The director-general of the World Health Organization (WHO) should step down over helping to cover up China’s negligence which led to the coronavirus spreading worldwide, Sen. Martha McSally said.

The Arizona Republican said on Fox Business on Thursday that Dr. Tedros Adhanom Ghebreyesus, who has been a constant cheerleader for communist China’s handling of the virus, should resign over the WHO’s handling of the pandemic. 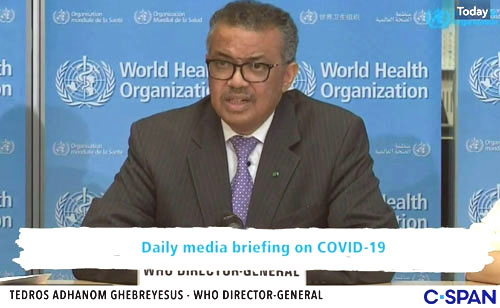 “I’ve never trusted a communist. And their cover-up of this virus that originated with them has caused unnecessary deaths around America and around the world,” said McSally. “The WHO needs to stop covering for them. I think Dr. Tedros needs to step down. We need to take some action to address this issue. It’s just irresponsible, it’s unconscionable what they have done here while we have people dying across the globe.”

Earlier this week, Florida Republican Sen. Rick Scott called for a congressional investigation into the WHO and indicated that perhaps the United States should withhold funding for the organization “helping Communist China cover up” the ramifications of the virus.

McSally agreed that “we need to look at addressing the WHO as well.” She also said U.S. debts to China “should be forgiven, as a minimum.”

Tarik Jašarević, a spokesman for the WHO, did not directly address McSally’s comments. But he said the organization expects members “to report data in a timely and accurate manner.”

“Membership in WHO and signing up to the International Health Regulations both carry with it the responsibility to prioritize public health, nationally and internationally, not only because global health norms say so, but because the two are inextricably linked, as this global pandemic has made clear to the world,” Jašarević said.

Barry Shaw, International Public Diplomacy Director, Israel Institute for Strategic Studies, said that “despite the political incorrectness of letting China off the hook for their insidious virus, there is no excuse to forgive them for the devastating health and economic damage they have caused by their malevolent behavior.”

In January and early February, “while claiming they had control over the virus in China, the Chinese government, through government-owned proxies and covert companies including the China-owed Greenland Group, were buying up huge stocks of masks, ventilators, protective clothing from around the world including from Australia, Egypt and African countries, and then selling them on in late February and March to countries desperately short of vital items and equipment to fight the pandemic,” Shaw said. “In this way the Chinese government was profiting from a virus that originated in their country that they had denied.They hoped to be seen as the savior of the world.”

Several U.S. lawmakers are saying China should be held accountable, including Sens. Marsha Blackburn, Tom Cotton and Marco Rubio. Sen. Josh Hawley said that “The cost of Beijing’s criminal conduct should be assessed and they should pay damages to the USA and the world.”

Business Today reported that a $20 trillion lawsuit has been filed against Chinese authorities over the virus outbreak.

In a Fox News article titled “How China can be held legally accountable for coronavirus pandemic”, Nitsana Darshan-Leitner, the executive director of Shurat HaDin, the Israel Law Center, was quoted as saying: “An argument could be made that just like support for terrorism, which is legally actionable, a government that engages in such reckless disregard and negligence and covers up an epidemic which has the potential to spread worldwide could be held legally liable.”

Darshan-Leitner added: “Cover-ups and deliberate acts to conceal a deadly medical crisis are not among the protected acts of a sovereign state or of responsible leaders.”

Future claims could include U.S. national security advisor Robert O’Brien’s reference to the doctors who were censored, pointing to the Beijing concealment in the early phase which cost the world community two months and aggravated the international fallout, leading to what House Foreign Affairs Committee Rep. Michael McCaul has termed “one of the worst cover-ups in human history.”