Almost a full seven years since he entered the epicenter of American politics, the power of Donald Trump in serving as a porch light for the credentialed officials of the ruling establishment to fly into like moths to a flame and out themselves as unprincipled hacks shows no sign of receding. 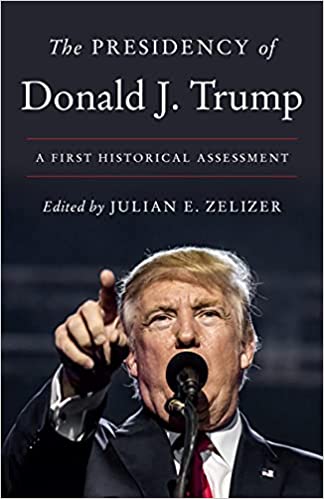 The title comes across as scholarly and restrained. Rest assured, that is where professional decorum ends.

In doing so, the academics further tarnish whatever minute shreds of reputation U.S. college intellectuals may maintain today.

The book has been hyped for more than a year. A March 2021 New York Times feature article hilariously reveals that the “scholars” in question knew full well the trap they were falling into but gleefully jumped in anyway:

Jeffrey Engel, the founding director of the Center for Presidential History at Southern Methodist University, noted the distinct lack of “fan praise” for Mr. Trump in the liberal-leaning group’s ranks (and among history scholars as a whole). Still, he said that while reading the chapters, he had been repeatedly brought up short by sentences making bluntly unflattering judgments about the president himself.

“There were points in these papers I would read a sentence and say, ‘Oh my God!’” said Engel, whose own chapter discussed the administration’s approach to global alliances. “But then I’d say, ‘I agree.’ The ways that we can express our own anger while still being accurate is symbolic of the unprecedented nature of this presidency.”

This is what passes for self-reflection among our modern would-be intellectuals. Engel is instinctively disturbed by the open antipathy of his colleagues toward the subject they are supposed to be objectively providing historical “perspective” on yet in the same breath is immediately on board with it. In short, he knows it is unbecoming professional behavior yet his personal bias against Trump is so overwhelming that he doesn’t care that he is ultimately damaging his own standing.

This contemporary history brings together 19 essays, written by 18 different historians, which cover a spectrum of topics, both foreign and domestic. Just a cursory glance at the chapter headings brings home the extreme nature of Trump’s presidency: “Militant Whiteness in the Age of Trump,” “The Crisis of Truth in the Age of Trump,” “‘Nut Job,’ ‘Scumbag,’ and ‘Fool’: How Trump Tried to Deconstruct the FBI and the Administrative State — and Almost Succeeded.”

Academia as a left-wing Mother Jones blog post. And they truly believe Trump is the one being sullied by this work.

The book is edited by Julian Zelizer, a Princeton professor who is also a CNN Political Analyst and “contributor” for taxpayer-funded leftist outlet NPR.

As Bryant shows us, Zelizer is to historical research what Don Lemon is to journalism:

In his introductory essay, Zelizer reminds us that Trump is not an outlier or aberration, which is hardly a fresh observation but one worth restating nonetheless: “Although frequently described as a lone wolf, Trump instead must be seen to be at the center of conservatism in the current era.” Subsequent essays show how the Trump effect has reshaped U.S. politics by hurling a brick through the Overton window, that gauge of mainstream acceptability, and trashing traditions and norms. The age of Trump, alas, is also the time of the Proud Boys, the Oath Keepers, and other fringe groups that wreaked such insurrectionary havoc, at the president’s behest, at the U.S. Capitol on Jan. 6, 2021.

Bryant dutifully jots off the various academics from major universities who joined in on this partisan pinata party:

Over the past six years, Kathleen Belew, a historian at the University of Chicago, has become a go-to guide on the rise of the American far-right, elements of which were in the vanguard during the storming of the Capitol. In a trenchant essay on militant whiteness, she shows how “the Trump years featured both a white nationalist policy project helmed by people in the administration and a white power social movement that believed many of the same claims about whiteness but wished for a white ethnostate, ideally through the overthrow of the country.”…

Nicole Hemmer, an academic at Columbia University, has also become required reading. Having chronicled the rise of media outlets such as Fox News in her 2016 study Messengers of the Right: Conservative Media and the Transformation of American Politics, here she charts the emergence of the “further-right pro-Trump media”….

In outlining Trump’s Middle East legacy, [Princeton’s] Daniel Kurtzer, who served as a U.S. ambassador in Egypt and Israel during the presidencies of Bill Clinton and George W. Bush, also highlights the former president’s narcissism: “Trump had no strategic vision or sense of American national interests. He cared only about himself, his own needs and vanities, satisfying his political base, and enhancing the prospects for his reelection.” …

Tellingly, Bryant particularly enjoys an academic scolding of Trump for what he obviously considers to be one of his biggest sins: claiming that regular Americans know more than the official appointed paragons of knowledge in our society, i.e., the professorial class writing this book:

Sifting through the mudslide of Trumpian verbiage can also turn up the occasional gem. “We are smarter than they are. … We are the elite. You are the elite,” Trump once told rally-goers, a quote that helps Angus Burgin, a professor at Johns Hopkins University, make a sharp observation about the former president’s anti-intellectualism: “Instead of merely disparaging ‘eggheads,’ as was common among McCarthyites in the midcentury years, Trump claimed that his own knowledge exceeded that of experts and scientific authorities.”

The 2021 New York Times article focuses on a Zoom call among the various planned contributors to the Trump book. This is how smart Angus Burgin’s expertists are:

“What if Trump had won?” Michael Kazin, a professor at Georgetown University, said, in response to a hypothetical thrown out by Zelizer. “I’d probably be trying to organize demonstrations rather than sitting around on Zoom.”

Astonishingly, a professor brought on to write a historical perspective of a recent presidency is so feckless about basic levels of occupational rectitude that he can admit that he would be demonstrating against the man he is charged with objectively writing about if he were still in the White House.

Just as amazing is that The New York Times, an unabashed ally to these academics, publishes these remarks without blinking an eye. The sheer inability to see that this damages credibility speaks volumes to the total disconnect with basic reality that utterly cripples the mass communications and higher education outlets of the ruling establishment when the subject is Donald Trump.

Pouring gasoline all over yourself, lighting a match, and torching your own professional reputation does not hurt this man. Yet the various credentialed officials of the ruling establishment simply cannot help doing it anyway.