Attorney General Merrick Garland’s “dirty fingerprints” are all over the “lawless” decision to send the FBI to raid the homes of Project Veritas founder James O’Keefe and his fellow journalists over the allegedly stolen diary of Ashley Biden, Fox News legal analyst Greg Jarrett said on Monday.

“What the Southern District of New York and the Department of Justice have done to James O’Keefe and his fellow journalists is outrageous and it’s lawlessness,” Jarrett said. 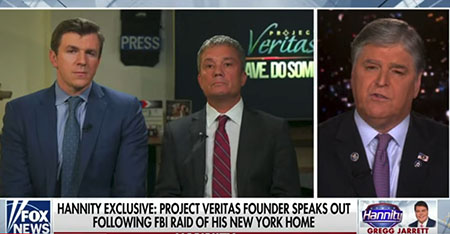 “First of all, this isn’t a federal case, it’s a state case. The theft of a diary, for God’s sakes,” Jarrett noted. “Why are the feds involved in this? Yes, there are nine federal statutes of theft and they all they deal with theft of government property. And this isn’t theft of government property. And secondly, Merrick Garland’s dirty fingerprints are all over this because under DOJ rules he has to sign off on a warrant or a subpoena for a news organization.”

In his first interview since the FBI stormed his home, O’Keefe told Fox News host Sean Hannity on Monday that he was “in a state of shock” as agents spent over two hours searching his apartment, telling Hannity they took two of his iPhones.

“This is an attack on the First Amendment by the Department of Justice,” O’Keefe said. “I’m calling upon all journalists to take a stand against this. A source comes to us with information, I didn’t even decide to publish it. If they can do this to me, if they can do it to this journalist and raid my home and take my reporter notes, they’ll do it to any journalist. This is about something very fundamental in this country. I don’t know which direction this country is going in. But journalists everywhere have to rise up because we broke no laws here. If they can do it to me, they’ll do it to anybody.”

Jarrett, who said that Garland is ignoring the First Amendment rights of journalists in the Ashley Biden diary case, concluded: “The president presides over the DOJ. The feds are not allowed to investigate a case involving an immediate family member. This is the weaponization and politicization of the DOJ and it’s shameful.”

Are there any real journalists willing to ask Joe about it? pic.twitter.com/5PgMxKUqxb