Rising health care costs and regulations due to Obamacare resulted in more than 10,000 small businesses shutting down and a loss of some 300,000 jobs, a report said.

Obamacare cost $19 billion in lost wages per year, according to a study released on Jan. 18 by the American Action Forum, a center-right policy institute. The study covered employers with 20 to 99 employees. 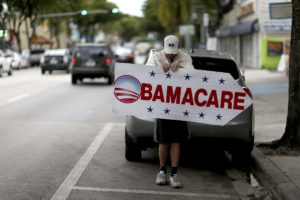 Ben Gitis and Sam Batkins, the authors of the report, used data from the U.S. Census Bureau, the Medical Expenditure Panel Survey, and the Bureau of Labor Statistics for their findings.

Overall, Obamacare has cost the economy $51 billion and added 172 million hours of paperwork through regulations, the American Action Forum said.

“To put that in perspective, it would take more than 86,200 employees working full-time (2,000 hours annually) to complete a year of new ACA paperwork, roughly the population of Miami Beach, Fla.,” the report said.

Congressional Republicans have already begun the process to repeal the health care law through the budget reconciliation process.