Report: ISIS bails out of Raqqa, moves capital to the southeast

As U.S.-led coalition forces close in on Raqqa, Islamic State (ISIS) has moved its de facto Syrian capital 90 miles to the southeast, a report said. 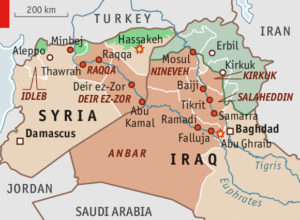 An Operation Inherent Resolve spokesperson told Sputnik on April 24 that defeating ISIS at Raqqa remains crucial for the coalition as it would damage the terror group’s “prestige, recruiting and ability to finance themselves.”

“The Coalition remains focused on isolating Raqqa, ISIS’s self-proclaimed capital,” the spokesperson said. “In addition, ISIS had previously used the city as a command and control node for international terrorism.”

Last month, an artillery battery with about 400 U.S. Marines was inserted outside Raqqa to shell the ISIS capital with artillery rounds.

The Marines later supported a U.S.-led air assault, when hundreds of Syrian fighters, along with some U.S.-backed special operations forces, were inserted in Tabqa located some 30 miles west of Raqqa, home to a strategic airfield and dam.

The U.S. military announced late last month the Tabqa airfield had been successfully recaptured from ISIS. The battle for the dam continues.

Lt. Gen. Stephen Townsend, head of the U.S.-led coalition based in Baghdad, said last month that Syrian Kurdish fighters would participate in “in some form or fashion” in the operation to retake Raqqa.