The Bill & Melinda Gates Foundation funneled hundreds of millions of dollars to several organizations which signed an open letter calling on Twitter advertisers to boycott the social media platform if Elon Musk restored free speech to it, a report said.

Musk recently asked his 94 million Twitter followers to uncover the funding behind the 26 NGOs who signed the “intimidation letter” threatening to destroy the company’s advertising revenue if Musk reversed its censorship policies. 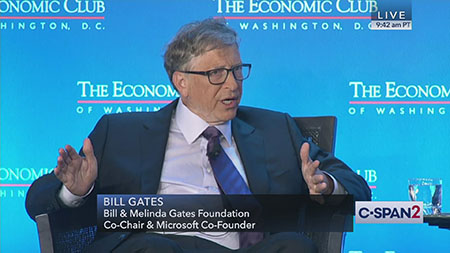 Money from the Gates foundation flowed to 11 of the 26 organizations which signed the letter, Breitbart News reported on May 23, citing information obtained from the newly-formed Foundation for Freedom Online (FFO).

Gates’s connection to the open letter “is significant, as Gates is in the middle of a public feud with free speech advocate Musk,” Breitbart senior technology correspondent Allum Bokhari noted. “Last month, Gates revealed his $500 million short position against Musk-owned Tesla, prompting Musk to call Gates a ‘b*ner’ killer alongside a meme of Gates as a pregnant man emoji.”

Gates is an outspoken proponent of online censorship and has frequently called on Big Tech to do more to stop “health misinformation.”

The New Venture Fund, which in 2020 received the largest one-year commitment the Gates Foundation had made in more than half a decade, funds four of the signatories of the open letter: The Center for Media Justice; The Media Democracy Fund; The National Hispanic Media Coalition (via the Media Democracy Fund); Accountable Tech.

The New Venture Fund is the parent organization for what has been described as one of the largest pro-Democrat dark money groups in America, the Sixteen Thirty Fund — another megadonor to the anti-Musk signatory Accountable Tech.

Sixteen Thirty Fund was a major player in the 2018 midterm elections, but played an even more significant role in the 2020 cycle, spending roughly $60 million funding the most prominent pro-Joe Biden super PACs, including seven-figure donations to Future Forward USA, League of Conservation Voters Action Fund, Take Back 2020, Priorities USA, Unite The Country, American Bridge, America’s Progressive Promise, Pacronym and other groups that spent hundreds of millions of dollars combined on anti-Trump and pro-Biden ads. The Republican-led anti-Trump group the Lincoln Project received $300,000 from Sixteen Thirty Fund in 2020.

The nonprofits of Arabella’s network spend millions funding other political organizations and dark money groups, such as America Votes and Center for Popular Democracy—but they also spend millions of dollars annually on lobbying the U.S. government.

“That means Gates’s biggest one-year act of ‘charity’ in more than half a decade – while running the world’s largest ‘philanthropy’ network – was functionally a pass-through payoff to surrogates of the Joe Biden 2020 presidential election campaign,” Bokhari noted. “So much for ending AIDS, world hunger, and disease — by the numbers, the Gates Foundation’s top priority seems to be electing Democrats.”

Report: Gates sent hundreds of millions to 11 leftist NGOs behind Twitter ‘intimidation’ letter added by Editor Two on May 25, 2022
View all posts by Editor Two →