As more states embrace legalization of marijuana — a pet cause of George Soros for decades — the British publication The Independent has published a groundbreaking series of articles by journalist Patrick Cockburn on how his son went insane smoking the drug.

Cockburn and his son Henry, who was treated for psychosis and partially recovered, have written an article in which Patrick Cockburn is quoted as saying his son played Russian roulette with cannabis “and lost.” 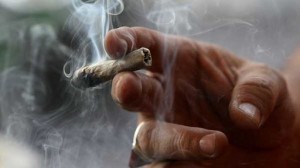 Henry, who smoked marijuana daily for seven years and was in mental hospitals for about eight years as a result, says, “When I reached a mental hospital, called St Martin’s, I spent three hours walking around the lunch tables trying to listen to my shoes. I thought my shoes were talking to me.”

Patrick Cockburn spent months speaking to the experts in the field and reports on the substantial evidence linking sustained marijuana use with mental illness. One expert, Sir William Paton, professor of pharmacology at Oxford University, reveals “that even limited social use of cannabis could precipitate schizophrenia in people who previously had no psychological problems,” and noted that “smoking a single joint could induce schizophrenia-like symptoms such as hallucinations, paranoia and fragmented thought processes.”

“Three-quarters of consumers may take delta-8 THC gummies and carts with no ill effect but the remaining quarter, the genetically vulnerable, play Russian roulette,” Cockburn says.

The added significance of the series of articles by Patrick Cockburn is that he is a left-wing media figure — the son of Marxist author Claud Cockburn — and might be predisposed to believe that marijuana is, as the liberal media constantly tell us, a relatively harmless drug or a substance with “medical” qualities. But he knows the harm it causes firsthand through what it did to his son.

AIM noted back in 2004, in a special report on George Soros, the main financier behind the drug legalization movement, that although marijuana is depicted by the media as a “soft” drug, it has “extremely negative consequences.” The book, Marijuana and Madness, cites studies and evidence from around the world, some of it going back 40 years, linking the use of marijuana to mental illnesses, including schizophrenia and psychosis.

In a previous article for the left-wing publication Counterpunch, Patrick Cockburn took issue with a report from the Global Commission on Drug Policy which played down the dangers associated with marijuana. “They fail to make clear that for people genetically susceptible to psychosis the risks involved in taking cannabis may be lethally high,” he noted. “Cigarettes and alcohol, whatever harm they cause, do not, at a young age, send you mad.”

The Global Commission on Drug Policy is funded by the Open Society Institute of George Soros.

In this country, the case of Pentagon shooter John Patrick Bedell stands out as a case study of the harmful effects of the drug. Bedell, who shot and wounded two guards at the Pentagon in March of 2010, was a psychotic pothead who hated a government that he believed was standing in the way of his desire to use, grow and glorify marijuana. He virtually worshipped the drug. “I’m a cannabis enthusiast,” he proclaimed.

John Podesta, head of the Soros-funded Center for American Progress (CAP), had suggested on ABC News that the taxing and legalization of marijuana on a national basis could be a way to pay for Obama’s health care plan.

“The pro-cannabis lobby says that the so-called ‘war on drugs’ has failed and legalization or regulation should be tried, though critics argue that no government would ever license a drug that sends at least two percent of its consumers insane,” Cockburn reports.

In the first of Cockburn’s articles, “Is this the ‘tobacco moment’ for cannabis?,” the veteran foreign correspondent suggests a connection between marijuana use and psychotic episodes that is comparable to the scientific recognition that tobacco smoking causes lung cancer and other illnesses.

In addition to the dangers of mental illness, Cockburn notes that a major study finds a drop in intelligence associated with heavy marijuana use.

Cockburn’s articles on the link between marijuana and mental illness become increasingly relevant as the public in the U.S. comes to grips with the fact that voters in the states of Washington and Colorado on November 6 passed ballot measures legalizing marijuana, in violation of federal law. Democratic Rep. Diana DeGette has introduced federal legalization that would amend the Controlled Substances Act to assert that federal law does not pre-empt state laws.

In response, a group called Save Our Society From Drugs, has said, “Many concerned citizens, community groups, law enforcement agencies and elected officials are concerned how these laws will impact their communities, states and the nation, and are urging the Obama Administration to take action by clearly communicating and enforcing federal drug policies.”

But the Soros-funded Drug Policy Alliance is rallying behind the DeGette bill, saying it would “end federal marijuana prohibition and allow states to set their own marijuana policy without federal interference.”

Cliff Kincaid is the Director of the Accuracy In Media Center for Investigative Journalism, and can be contacted at cliff.kincaid@aim.org.