Pull out your credit card for her memories: Hillary recites alleged 2016 victory speech

Five years after her second failed presidential run, Hillary Clinton recited what she claims is the victory speech she never got to give.

While she will almost certainly never win a presidential election, some observers say she may contend for an Oscar, or Grammy, or Emmy, or Tony, maybe all of the above, after her performance. 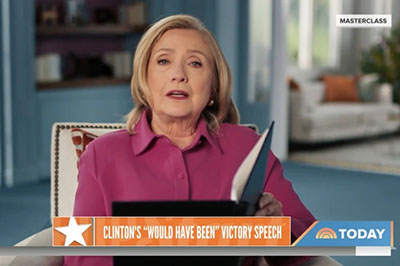 “I didn’t, as you know, write a concession speech because even though we had a lot of bumps in those last 10 days, I still thought we could pull it out. So I worked on a speech that was really about my journey,” said Clinton.

“I’ve never shared this with anybody,” Clinton says of the speech she said was intended to be given in New York on Nov. 8, 2016. “I’ve never read this out loud. But it helps to encapsulate who I am, what I believe in and what my hopes were for the kind of country that I want for my grandchildren and that I want for the world.”

“I’ve met women who were born before women had the right to vote. They’ve been waiting a hundred years for tonight,” Clinton said. “I’ve met little boys and girls who didn’t understand why a woman has never been president before. Now they know, and the world knows, that in America, every boy and every girl can grow up to be whatever they dream — even president of the United States.”

Clinton did not deliver a speech on election night in 2016 after it was confirmed that she lost to President Donald Trump.

“Our values endure, our democracy stands strong and our motto remains: E pluribus unum. Out of many, one,” Clinton said was part of the victory speech. “We will not be defined only by our differences. We will not be an ‘us versus them’ country. The American dream is big enough for everyone.”

Not an “us versus them country.” Sounds good. Instead of actually delivering that sentiment, win or lose on Election Night, however, Clinton claimed in an address the day after the election that the country was “more deeply divided than we thought.”

Her fans at the Today show gave Clinton the platform to recite the cringe-worthy “victory speech,” which Clinton used to promote her new MasterClass videos which she will sell on a video streaming platform. MasterClass charges $15 to $23 a month for subscriptions.

If her videos are anywhere near as successful as her 2018 speaking tour with husband Bill, Hillary will be raking in tens of dollars.

Pull out your credit card for her memories: Hillary recites alleged 2016 victory speech added by Editor Two on December 9, 2021
View all posts by Editor Two →