AFT President Randi Weingarten spoke out today to clarify that the teachers union official “pro-choice” stance only applies to killing babies, not to parents being able to decide where their children attend school. 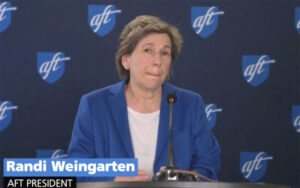 The controversy stemmed from a poorly-worded email intended to bolster support for abortion rights among the union’s Democrat base. The email stated, “The right to choose for oneself is a fundamental right of American citizens.” Some union members grew concerned, thinking the choice being referenced was the right of parents to select what school their children attend.

The union issued a swift apology this morning. “To be clear, we were only talking about a woman’s right to choose to kill her unborn child,” Weingarten said. “Once a child is born, we firmly believe that no parent, man or woman, has any right whatsoever to decide where a child attends school.”

Weingarten went on to note that, “in fact, other than abortion and selecting your own gender identity, we can’t think of any other instance where we actually support individual choice. We proudly support mandatory vaccinations, forced masking, and burning down the neighborhoods of anyone who disagrees with us politically.”

Pro choice? Teachers union hastens to clarify which individual choices email supported added by Editor One on February 1, 2022
View all posts by Editor One →